Han's past has surfaced to cause problems for him and Leia. Luke continues to search for Jedi knowledge.

This series continues to amaze me. A common concern I've seen from some is this series being limited to the time period in between Episodes IV and V. Jason Aaron is having no problems whatsoever bringing the fun and excitement we crave to this book.

The characters we all love may be split up but that means we're getting two separate adventures in one. The first deals with the revelation from Han Solo's past concerning the new character, Sana, in issue #4. Since then, we've been left wondering about her claim to be Han's wife. As you can imagine, it creates a pretty awkward moment for Han (and Leia). We may not know a lot about Sana but she shows she is more than capable to stand up with or against the likes of Han. It's no secret there hasn't been too many female characters in the Star Wars universe with room to shine (and kick butt) and Sana gets to give us a glimpse of what's she's capable of. It should also be noted that Leia gets an opportunity as well.

The other half of the book deals with Luke Skywalker, trying to figure out how to continue his Jedi training. After his run in with Boba Fett at Obi-Wan's place on Tatooine (while temporarily blinded), he now figures he knows the next best place to get some answers--the old Jedi Temple on Coruscant. Sounds like a great plan except because the planet is under control of the Galactic Empire, he can't simply fly down to the front steps in his X-Wing Fighter. This means Luke has to be a little creative and, of course, it leads to some other problems.

To top all this off, this issue also features the debut of Stuart Immonen as the interior artist. His recent work on ALL-NEW X-MEN made me a big fan and he does a fantastic job here along with Wade von Grawbadger on inks and Justin Ponsor on colors.

With the launch of this STAR WARS series, fans have been on the edge of their seats in anticipation of what will happen next. Jason Aaron has captured the vibe of the franchise and makes it feel like we're experience the adventures of the beloved characters for the first time once again. Just when we thought the series couldn't get any better, we finally get to see Stuart Immonen's amazing take on the characters. This book reminds us why it's a great time to be a Star Wars fan. 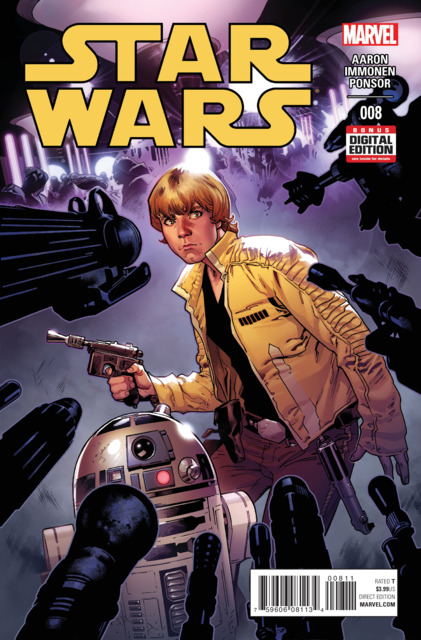