As the Rebels try to take out a weapon factory of the Empire, Luke finds himself facing Darth Vader. There's no way he's ready for this, right?

This comic series has started out with a pretty crazy feeling. We know that since it's set between Episode IV and Episode V, certain things can and can't happen. The first issue set up the scenario with Luke, Han, Leia, Chewbacca, C-3PO, and R2-D2 on a mission to destroy the biggest weapon factory in the Empire.

Who would have thought we'd see Luke Skywalker come face to face with Darth Vader right away? There's no way he's even close to be ready for a lightsaber duel with the Dark Lord of the Sith. Jason Aaron handles this beautifully. With neither being aware of who the other truly is, you'll be on the edge of your seat during the encounter. Darth Vader has to find out at some point who Luke is, right? This previously was depicted in a novel but we know that doesn't necessarily count anymore.

John Cassaday gets to draw some really big Star Wars action. It definitely feels on a different scale from the movie and that helps make the story here simply feel bigger than past Star Wars comics we've seen before. The detail as vehicles or environments take damage during the fight along with the gunfire and chaos looks really good.

The lack of Chewbacca was a little disturbing.

Seeing Luke face off against Darth Vader with a lightsaber or the use of a certain vehicle that appears in one of the movies does feel a little weird. It's a weird in a good way though. It feels like it's catching you off guard or it shouldn't be happening "yet," but Aaron is making it all fit together nicely.

Jason Aaron continues to find the right mix of action, adventure, and humor while also throwing in some bigger and impressive moments. There are some parts that feel bigger than the movies but Aaron's writing and John Cassaday's art makes it work nicely. Despite any limitations being set between Episodes IV and V, there is still plenty of action, suspense, and even some fun. This series is proving to be a great addition to the characters and events we know and love. This book makes me feel like a kid again. 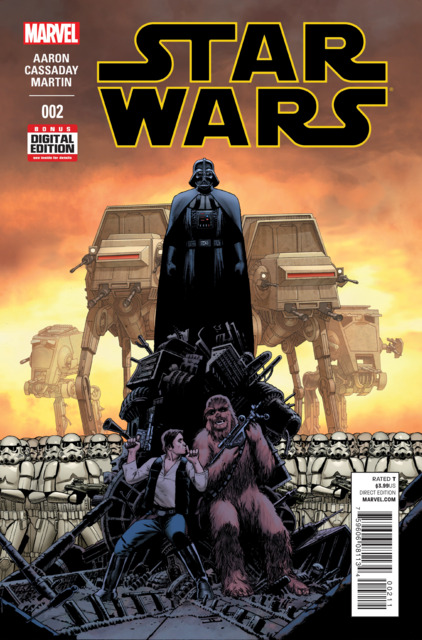