Star Wars #15 - From the Journals of Old Ben Kenobi

What did Obi-Wan do after Luke was sent to Tattooine?

There's this gigantic chunk of time that takes place between Star Wars Episode III & IV, where Luke is sent to Tatooine to live with his Uncle Owen and Obi-Wan follows. What was Obi-Wan up to all those years, alone on that desert planet?

Since Lucasfilm axed the extended universe, the Marvel comics series, the couple of animated series, and a few books have gone a bit more in-depth with their new extended universe, but there's one area, specifically, I've always been interested in and that's when Obi-Wan was just hanging out on Tatooine. What did he do during this time? Well, according to this issue of STAR WARS, he kicked a lot of butt and kept Luke safe from thugs, Sandpeople, and boredom.

This issue does a lot for developing the character of Obi-Wan Kenobi during his transitional years from Jedi knight to a creepy hermit. He truly cares for Luke and looks over for him and keeps those safe around that cannot defend themselves. He's essentially the Captain America of the Star Wars Universe. This stand-alone issue was a fantastic read and had some wonderfully exciting moments, like when Obi-Wan beats up a slew of Tusken Raiders. We get a lot of different sides to this character and writer Jason Aaron does a great job at delivering the core of this character to the audience.

Holy moly, the art on this book is nuts in the best way possible. Mike Mayhew provides some incredible art here that makes you feel like you're in the Star Wars universe unlike any comic before. The characters look fantastic and the colorwork is outstanding. Mayhew bridges the gap between comic book art and the movies in an imaginative way. The battle scene between Obi-Wan and the Tusken Raiders is a wonderful splash page that you'll just get stuck on to stare. We need to see Mayhew back on a Star Wars book as soon as possible.

This was a fantastic issue of STAR WARS. We get to visit an era that we haven't seen much of and get to follow to adventures of Obi-Wan during that time. It's a lot for a fan to handle and Aaron and Mayhew do a stellar job delivering this story. There is a tiny bit more to the story than just Obi-Wan, but we're not spoiling anything here because this is an issue to pick up this week. 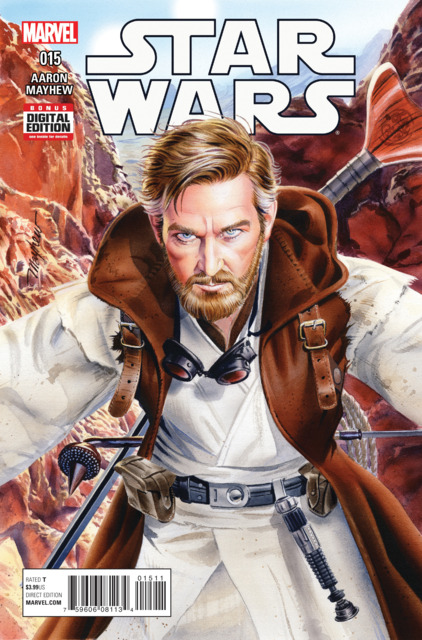