They've just killed a major Marvel character. What's next for the team?

With the launch of the All-New, All-Different Marvel titles, we're mainly seeing a lot of familiar things. There hasn't been many changes in the characters we saw before Secret Wars. SQUADRON SUPREME is giving us something different. James Robinson has gathered different versions of the team members from alternate Earths, before they were all destroyed, and brought them together with one goal--protect this Earth by any means necessary. That included killing Namor last issue for his part in the destruction of many Earths in the Marvel Multiverse.

With that killing done so publicly, the Squadron has attracted a lot of attention. What do they do next to top this deed? They head off on their separate ways to take care of personal matters. It might seem like an odd direction for the second issue after the explosive battle in the debut one. What fascinates me most about this team is the fact they are so different. These are alterate versions of the team members and they don't really know each other. They're also on a strange and different Earth. They need to figure out what this version of Earth is about and why they should be protecting it in their special way. With some members doing their own thing, Robinson is allowed to explore who they are individually. This adds to the depth of team. While I have read various Squadron titles in the past, I'm loving the fact that we have this new version of the team that barely knows each other.

We did see last issue that their big action attracted the attention of some other heroes. The good and the bad thing is there isn't much of an interaction with them in this issue. I'm enjoying the characters doing their own thing in the Marvel Universe. It almost feels like they're in their own separate comic book universe as they move behind the scenes. This contrasts their actions from the first issue and, again, let's us see who these characters are. Part of me doesn't want to see a big skirmish with an existing and obvious team just yet but, at the same time, it's something we saw coming in the first issue. With what they did and how they did it, the action can't go unchecked in the Marvel Universe.

Leonard Kirk's pencils and Paul Neary's inks are top notch and Frank Martin's colors captures the mood of the book. We get to see the characters in different locations within the Marvel Universe. The distinct look of each reminds us of how big the Marvel Earth is. It's not just New York City or the small handful of other places we've seen. As some of the members are doing their own thing and not in the middle of a giant battle, just the way they stand or carry themselves tells us more about them.

SQUADRON SUPREME is clearly one of the surprise All-New, All-Different Marvel titles we're seeing. James Robinson is doing some bold things and there's a big sense of not knowing where he's planning on taking the characters and series. It's always satisfying when you can expect the unexpected. Often the line between heroes and villains is obvious. Within the first issue, Robinson showed us his team is much more complex than that. The art and color by Kirk, Neary, and Martin fits the book nicely. We were expecting a big battle and some repercussions after the events of the first issue but that's put on hold so we can see the individual characters explored a little more. This is a book where anything goes. You won't want to miss what Robinson has up his sleeves. 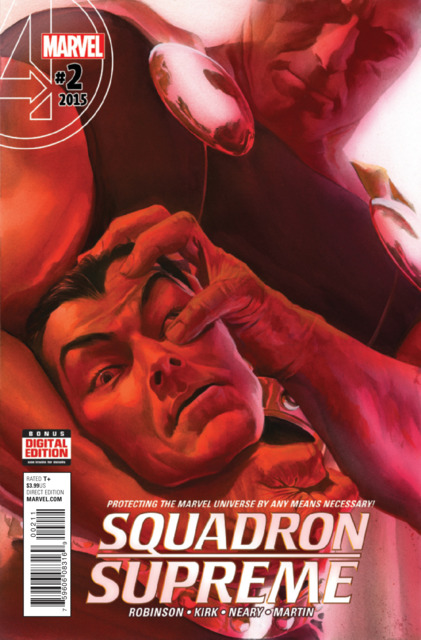