No's a tough fellow, but does he have what it takes to protect Hope from the gruesome obstacles that his world has to offer?

SPREAD co-creator/writer Justin Jordan sure knows how to create badass characters and adventures, doesn't he? LUTHER STRODE is consistently over-the-top and full of awesome and DEAD BODY ROAD was non-stop chaos and a total blast. Now, he's continuing his tradition of creating more graphic and exhilarating books with SPREAD.

This time around, his lead character, No, is a man of few words and sure is talented with his melee weapon. This, of course, means there's chances to showoff just how skilled and formidable the dude is (and it's definitely exciting), but seeing as he's more of the strong, somewhat cold and silent type, it allows us to fully appreciate the limited amount of dialogue he produces and the little bits of emotion he'll express. I couldn't help but smile at that final panel and him awkwardly telling the baby, Hope, to be quiet was definitely amusing. He sure is a people person, isn't he? Now, as appealing as this character may be, you can't have a mostly silent lead (well, you can, but I digress), so Jordan wisely has Hope narrating from the future. She's reflecting on all of these incidents and giving us a little more insight into No's actions and what this journey has in store for us. The art paints a perfectly clear picture of what's going on, but it's still nice to have that extra elaboration.

Co-creator/artist Kyle Strahm and colorist Felipe Sobreiro generate some wicked visuals that are a topnotch fit for this frightening place. The not-so-kind humans are all kinds of twisted and exaggerated, the violence is packed with motion and shocking gore, and the monsters are every bit as scary and terrifying as they should be. They're looking to deliver a action/horror tale and these pages definitely deliver and then some with the dark, violent and abnormal atmosphere.

As of right now, it feels like we're just going through the motions with the villains and that part isn't nearly as compelling as what's going on with No and Hope. I'm sure that'll change in due time, but right now it's just glimpses of them and an oh-so-brief showing that yes, they're a threat. Also, was it a little odd to anyone else that the huge creature was able to sneak up on the slavers in the woods? It's just a little tough to picture a monster that big smoothly and stealthily moving through the woods and not knocking down all of the trees that are in its path.

Minor gripe: it's a little odd having Hope talk about the challenges No faces when he's planning to take down two characters when he basically decimated a larger and armed group in the previous chapter.

SPREAD #2 offers more of what we saw in the first chapter: thrilling and violent action, a good look at this scary world and the monsters -- both human and other -- that inhabit it, and a decent amount of buildup with the protagonist and his goal. Right now, the villains don't feel like anything out of the ordinary and we haven't seen significant progress with the main narrative, but it's still a totally engrossing ride. SPREAD's blatantly inspired by several great franchises and even though it draws strong parallels to other stories, it's still able to feel like its own unique and warped tale. Fans of stories like The Last of Us or John Carpenter's The Thing, do yourself a favor and give this a read. 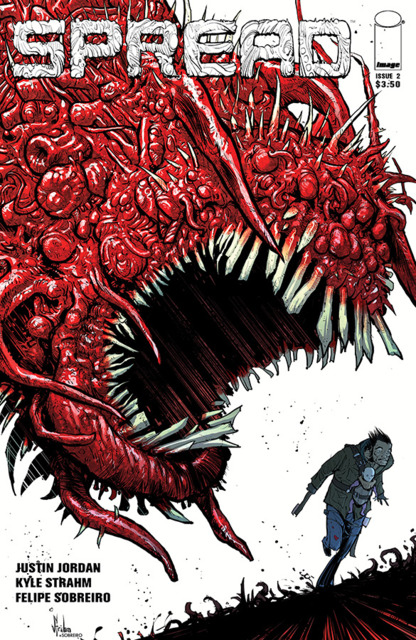