The path to the villains’ ransomed families comes to a truly unexpected end.

Spider-Woman’s been hitting the streets and trying to solve the mystery of just who’s blackmailing and ransoming super-villain families to force the villains into committing crimes...which doesn’t SOUND like much of a change, but it’s NOT committing crimes on THEIR terms! Dennis Hopeless wound up his “interesting idea with a twist” writing style and spun a tale that actually paints the street-level villains in a sympathetic light not seen since Matt Fraction’s darkly comedic run on PUNISHER. Jessica Drew plays possum for as long as she can, but when she makes her move, it’s absolutely fantastic and does a lot to remind the reader that she’s a woman of many talents. And then things get...weird. What Jessica Drew stumbles into boggles description, and Hopeless does a fantastic job of keeping things tense while also giving little releases of humor and even surrealism. There’s also plenty of catch-up on Ben Urich and Drew’s benefactor, and these scenes are a welcome break from the action and the strangeness as there’s a certain relatability between these two, as Ben draws from his countless years of experience dealing with the strange and superheroic to actually be a comforting force.

Javier Rodriguez goes all-out on the pencils this issue, particularly in one scene showing Spider-Woman escaping her captors, somehow achieving both panel pacing and the illusion of motion in one single panel, and he never ever lets before or after. There’s an effortless flow to the action AND the more mundane moments that allow very simple things to become exciting to watch, in addition to the larger set-pieces. Alvaro Lopez’s inks lend themselves well to the semi-old-school style of the book with lots of thick, defined outlines to emphasize little things like facial expressions and body language while Muntsa Vicente’s colors bring out the almost-too-bright bizarre turns the issue takes.

There is an AWFUL lot packed into this one issue, and the breakneck pace doesn’t allow for much time to breathe or explain ANYthing. Part of this is obviously intentional, there’s a mystery at the heart of this that is genuinely intriguing but it feels like, despite the frantic pace, the answers are being doled out one tiny drop at a time.

A gorgeous book with a tremendous cliffhanger and a mystery that’s only getting weirder. This book’s officially on a roll. While the slow drip of answers may be a little infuriating, it hasn’t gotten to the point where it’s truly problematic as the characters are still well-written, the art is amazing, and, perhaps most importantly, the storyline still feels compelling. The answer to a mystery nobody cares about is irrelevant, so as long as it remains an answer worth seeking, a little patience may be called for. Hopeless hasn’t let down yet, and Rodriguez, Lopez and Muntsa Vicente are finding their voices more and more every issue. 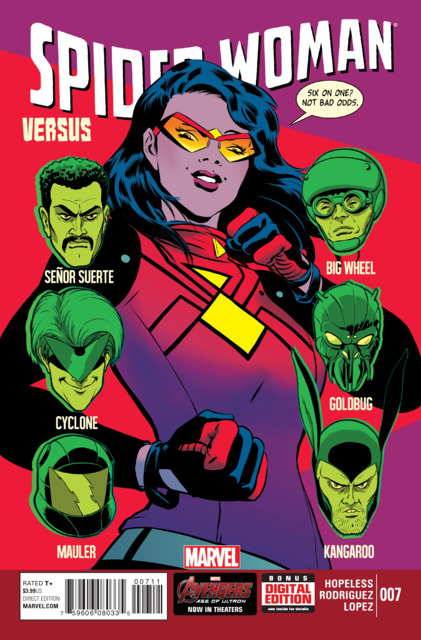