ALL THE SPIDERS! EVER! AT ANY COST!

If variety is the spice of life, this issue of SPIDER-VERSE is piled high with more spices than a curry platter. Five stories at thirty pages doesn’t leave much room for character development nor expansion, but that’s not really the goal of this book. These two issues have been far, far more about wink-and-nod entertainment with a few legitimately interesting tales thrown in for good measure. This issue, specifically, splits that about sixty-forty giving us three great, fleshed-out stories and two that are just for fun, though those latter two are the only ones that feature the Inheritors. Dan Slott and Kris Anka, along with Chris Sotomayor open up with a bite-sized videogame Spidey (specifically from the Capcom fighting games he’s starred in) fighting an extremely OP Morlun (patch needed BADLY) and it’s great for a quick chuckle, but the issue takes off as Kathryn Immonen, David Lafuente with Alvaro Lopez and John Rauch take us to the dreamscape for the recruitment of the legendary Anansi. This story stands out for its hilarious adherence to the tropes of old legends, casting Anansi as both trickster and savior, playing prank after prank and not batting an eye at things like interdimensional travel. We then get what, for me, was the highlight of the issue as Jed MacKay and Sheldon Vella give us a hard-edged, anti-authoritarian origin of Punk-Rock Spidey in a story that is becoming more and more relevant to American poltiics, but still manages to be dripping with the style and fashion of a great 80s tale. We then get something a little different as Enrique Puig, Francisco Herrera and Fernanda Rizoga give us an entirely Spanish language Spidey tale. I haven’t read Spanish in over ten years, but I got enough, and the art is strong enough, to convey what was happening just in time to end with Dan Slott, Ty Templeton and Andrew Crossley giving a nod to the not-so-Marvel cinematic universe, lightening up what seems to be a desperate battle. WHEW! While finding room to go into detail would take up too much space, I’ll say that cover-to-cover this issue feels RIGHT. The artists compliment the numerous styles perfectly, establishing the tone and tenor of some very, very different stories effortlessly and the writing delivers exactly what each of the brief stories need.

This book is, by its very nature, all over the place and unfortunately this means that the middle three stories end just as it feels like they were beginning. While the Anansi story felt nice and self-contained, the other two “big” stories felt like there was so much more to know and so much more to tell, but unless there are some last-minute additions to Marvel’s lineup, we’ll only be seeing more of Spider-Gwen in the longterm. The issue winds up feeling more like a novelty than a cohesive vision.

A novelty it may be, but it’s a great one that manages to evoke a ton of emotion for some of these characters. Whether it’s righteous fury with punk-rock Spidey, a knowing chuckle at any of the more “referential” stories or the satisfaction of a trick well executed, the stories accomplish what they set out to do. The fact that it’s more cotton candy than prime rib isn’t a failing, it’s a deliberate choice of tone. 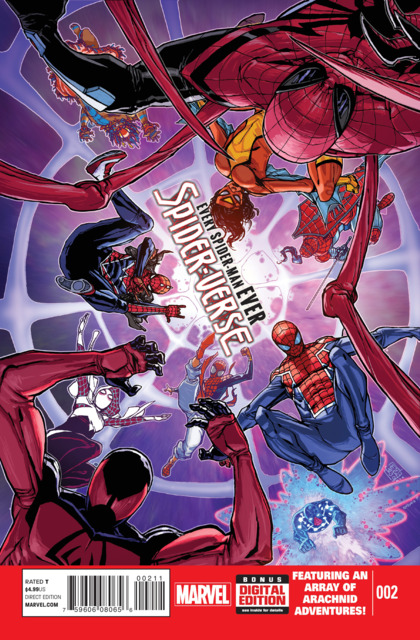