Miles deals with dreams of Hulk smashing him.

Miles Morales is having visions of an enraged Hulk destroying him and everyone else. Miles' mother goes to see Jessica Jones for some help.

Once again, it's another tie-in issue with CIVIL WAR II, which has been trudging along for quite a while now. Luckily, the event tying into this issue doesn't really break up the flow of the storytelling too much.

The issue is still about Miles Morales; however, it delves a bit deeper into his psyche as Miles has nightmares of the Hulk smashing him. Miles is young. He's not a veteran hero. He feels caught between a rock and hard place because Tony Stark wants him to join up for the cause, but Miles is unsure, and his friends aren't too keen on it as well. This is all paced nicely through the issue and provides an interesting story.

The whole issue isn't just about Miles. It also deals with Jessica Jones, since Miles' grandmother tried to hire her to keep tabs on the young man. Brian Michael Bendis and Nico Leon do a fine job at building on the world Miles lives in. This isn't just a book about a superhero. It's about family, relationships, and growing up, and that's really the endearing thing about the series.

Leon does some fantastic art on this issue. He and color artist Marte Gracia deliver some precise and engaging panel-to-panel storytelling. There is a great sense of movement and while there aren't many action sequences here, the way they are laid out is perfect and delivers some fantastic moments. The page layouts are unique and fresh on every page, so at not time does the book drag at all because of the art.

The only real downside to the issue is that the whole Civil War II story isn't grabbing me. Why is Miles so important to Tony Stark? Am I missing something? Is this just Tony trying to grab any heroes he can? Personally, I'd rather just see Miles Morales doing his own thing, away from these major stories, since he is technically new to this universe.

Overall, this issue of Spider-Man was enjoyable and continues to build on Miles' world and not just his life as a superhero. The whole reason he's involved with Tony Stark leaves too many questions, one of which being "Why does he matter to Stark?" The art team is doing a great job on this issue, and while some of us may have event fatigue, this is still a good read. 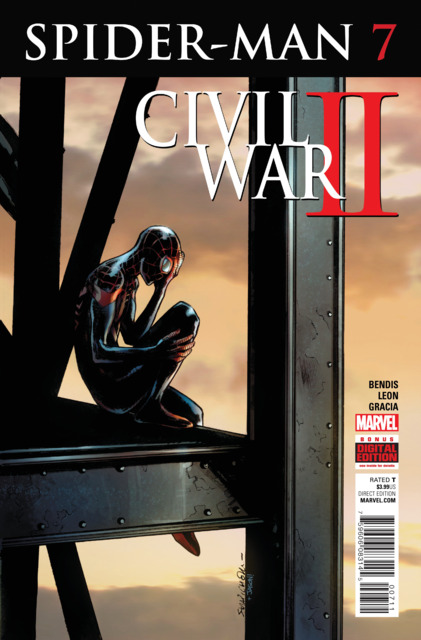