Spider-Man takes down Blackheart and the world realizes there's a new Spider-Man.

Mile Morales beats on Blackheart, tries to gain acceptance from Peter Parker, and the world finds out he's not white.

The second issue of this new series is an improvement from the opening offering, as readers get to know Miles a bit more. On top of that, there's a story building here, and it's not just "Miles beat up Blackheart." Miles wants to be a hero on the level of everyone else, including Spider-Man, but not everyone around him is ready to accept him.

Brian Michael Bendis plays with the relationship between Peter and Miles here, since originally, Peter allowed Miles to use the name "Spider-Man," while fighting crime. There's a brief interaction between the two characters here, but it's nice to see a little more building on what Bendis originally presented in the crossover book Spider-Men, years ago.

This issue really echoes social media and what's going on with diversity in comics currently. Because Miles mask was torn, people got to see that he has darker skin. One young woman takes to the Internet to talk about how excited she is that a "kid of color," as she puts it, is Spider-Man. What makes this scene really poignant is that Miles doesn't like this. He doesn't want to be "Black Spider-Man" or "Hispanic Spider-Man." He wants to be just Spider-Man. He wants to be a hero and recognized for that and not for the color of his skin. Regardless of how the Internet in real life feels about Miles, this is a cool spin on that. Bendis puts us in the head of that character to see how they feel about all that talk. Hopefully, this is something he pushes forward with in future issues. Once again,

Once again, artist Sara Pichelli and colorist Justin Ponsor knock it out of the part. This was the art team behind Spider-Men, and since then, these two artists have defined the look of Miles Morales. What's pretty cool about this issue is that during a flashback sequence, Pichelli changes up her style and delivers a more "cutesy" version of Miles and Peter for a couple pages, and it works exceptionally well. She's an incredibly dynamic artist and does wonders when it comes to page layouts and overall compositions. Her art is great, but it's Ponsor's colors that give this book tremendous depth. His work is just as important as Pichelli's on this book. This truly is a dynamic duo.

While the first issue of this series was pretty decent, Spider-Man #2 gives this character more direction and offers a lot more depth. The art on this book is worth the price of admission alone, but what makes this issue great is that it's building Miles Morales as a stronger character in the new Marvel Universe. This book really feels like it's on the right track. 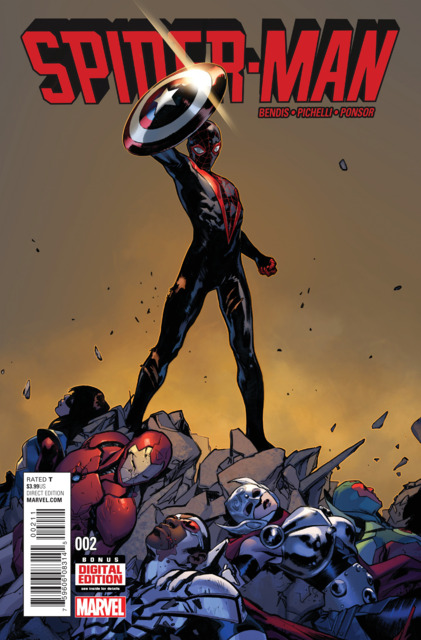