Miles Morales is with everyone else in the main Marvel universe! He takes on Blackheart and also tries to find a way to juggle his personal and superhero lives.

Spider-Man works because this opening issue is much more of an introduction to who Miles Morales is rather than the mask he hides behind. For many readers, Miles Morales is unfamiliar territory, so having this issue focus primarily around Miles day-to-day life gives more insight into what makes Miles tick.

This is something that hearkens back to classic Spider-Man stories back during the Bronze Age of comics. How does one juggle a social life, school, love, and being a superhero? Brian Michael Bendis adds all of this to the opening story to really reel in new readers, who, again, might be a tad put off by someone else being Spider-Man.

Overall, this issue packs an emotional punch. We're seeing a character trying his best but it's simply not enough to make everything work. It's tough to watch someone you're rooting for just not live up to his full expectation and it's not because he isn't trying. It's because there simply isn't enough time.

The downside lies in the fact that there's a lot of over-familiarity with the story and overall work presented in this issue. It feels like a Bendis story we've seen quite a few times, which isn't a bad thing for new readers, but to those who have been Ultimate Spider-Man fans for quite some time, this issue does feel like it's treading the same old ground, in a different universe.

Sara Pichelli and Justin Ponsor deliver some fantastic art in this opening issue. The Blackheart design is incredibly creepy and they gave the character a really nice, contemporary feel. When I say "nice," I mean "terrifying."

Pichelli and Ponsor also have some more fun moments, like when Morales is imagining how his life could have gone differently. We get a more animated, over-exaggerated style which adds a nice element of fun to it. The action sequences look great, as Pichelli does some interesting and awesome things with page and panel layouts as well. Artistically, this book is a home run.

The issue does leave readers at an interesting point as Miles and Peter Parker are face-to-face, and every part of me can't help but wonder "when are we going to wrap-up this Miles Morales of the 616" that was set up in the Spider-Men story a few years back?

Spider-Man #1 is a really solid start to a new series, which plays a bit better to brand new readers rather than Miles Morales fans who have been around since the start. This feels a lot more like an introductory issue to the character since this issue does retread a lot of what the previous two Miles Morales volumes set up. However, the art on this issue is wonderful and worth the price of admission alone. Hopefully, the future issues will give fans, both new and old, a little something more to chew on because there's a lot of potential for a great series here. 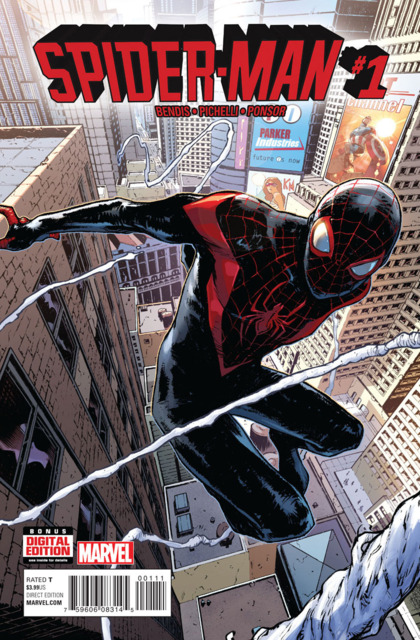