The Inquisition finally crosses paths with the leader of Yellow Lanterns.

Cullen Bunn has, over the last three issues, given us an interesting Sinestro story. Creating an interesting story around a villain is worth a limited series, but in order to sustain an ongoing, the central protagonist has to begin to be sympathetic to the reader. This issue accomplishes that with a surprising economy. It begins with the much-talked about (at least in previous issues) Inquisition finding their way to Sinestro and immediately demanding he surrender all emotional ties. This goes over about as well as one would expect, and the battle isn’t without casualties. We get to see inside some of Sinestro’s deepest anxieties, which is actually quite different from seeing his fears. His anxieties go a long way to humanizing him and showing us that, even if he’s a monster that we’d never want to be associated with, he’s still a person and, as much as he’d deny it until he’s...whatever color purple people turn when they’re out of breath, he has very relatable hangups. This doesn’t break the ultra-arrogant exterior, it only lifts it to show us the turmoil underneath. The supporting cast, particularly Soranik and the other Yellow Lanterns get some development of their own and most come out of it looking ever more intriguing except, perhaps, for Lyssa Drak who actually doesn’t feel like she needs all that much development. She’s a sentient terror, which is why she wouldn’t be likely to sustain her own ongoing series but fits in perfectly to this one. Watching Sinestro continue to try to win over his daughter is, as always, a highlight of the issue as that also further humanizes him to some extent. No matter how arrogant or powerful he is, the trials of fatherhood elude him.

Rags Morales explodes on the scene in this issue and I’m thrilled to welcome him to it. I didn’t actively dislike Dale Eaglesham on the title, but I think his exaggerated, muscular style clashed with the tone of darkness and horror. Morales draws the Yellow Corps slender, gaunt, thin and even svelte and that is the look that I think suits the title's tone better. The visuals are muddy and blurred, but not indistinct nor hard to follow. It’s a style that compliments the general tone of moral ambiguity and fear that the title is absolutely drenched in, and it works wonders, much of it owing to colorist Jason Wright. I wouldn’t say the colors in this issue “pop” but I also don’t think they should, particularly as the dulling of emotion is one of the key points.

First things first: The cover of this issue is something of a spoiler. I wouldn’t have AS much of a problem with it if it were at all indicative of the book’s internal content before the final page.

Without giving away too much, the Inquisition is dealt with in relatively brief and tidy fashion considering how much hype there was surrounding them. I get that it was only within this book, which has three issues before it, but they were given a great deal of weight. It’s heavily implied that this isn’t the end of them, but after this issue their credibility as a major threat is undermined somewhat. I love the character moments in this issue, but the overall plot takes a backseat leading to a final page reveal.

The characters are what have made this book great and they’re what continue to make this issue great. Sinestro has scarcely been this interesting or sympathetic in a long, long time and his Corps is now populated by more than just ravening monsters whose only question is where their next kill will come from. While those ARE still a presence, the more interesting, if off-putting, characters are getting the spotlight they have thus far earned. The plot’s may have its problems, but they’re more than eclipsed by the strength of this cast. 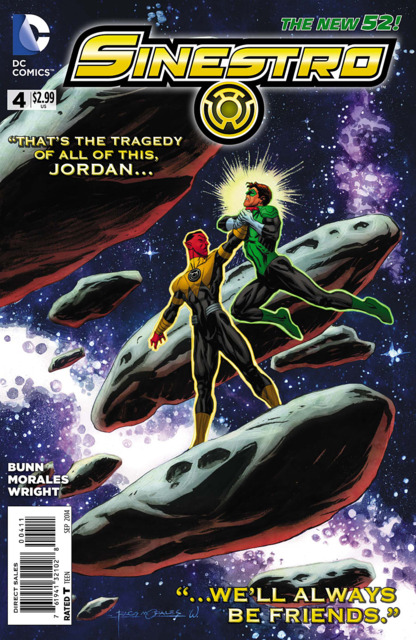