Silver Surfer and Dawn make their way back to Earth. Why are the Guardians of the Galaxy getting in their way?

After the craziness of the Impericon, Silver Surfer sets out to return Dawn Greenwood to her home on Earth. This gives the opportunity for a run in with the Guardians of the Galaxy. I'll admit, it felt a little forced at first to feature the characters on the front page. Space is a big place so what would be the chances of them coming across each other. The reason is explained and it does make some sense. With this giving Dan Slott a chance to write them and Mike Allred a chance to draw them, it's like we get a little bonus.

The crux of issue is the arrival at Greenwood Inn, Dawn's home. It's a simple matter of dropping her off and leaving right away. Slott gives us a chance to see more of Dawn's world and this little corner of the Marvel Universe. It also allows more time for Dawn and Norrin to bond. Slott has given this book a pretty humorous angle and it might be a tiny bit strange to see the Surfer in this setting, but he also gives us some glimpses into who he is. There are some aspects of the Surfer that many never really thought about. Of course it takes a human to humanize him. It's been a while since Norrin's been around normal humans so any time he has with Dawn is bound to have an effect.

I could never miss a comic that Mike Allred illustrated. It honestly brings me joy to see his interpretation of different characters. Laura Allred's colors here are phenomenal as always. The art and color have a way of taking me to a different mindset. This isn't the typical versions that we might be used to and that's just part of what makes it so refreshing.

The inclusion of a couple other guest stars and a mystery that's brewing makes the issue even more exciting.

While the Guardians' appearance is explained, there's still a slight feeling of being mislead. They only really appear on three pages. It's a good interaction but doesn't feel like enough to warrant their full appearance on the cover. Even if the cover is pretty groovy.

When we see more of Dawn's home, there's a strong sense of quirkiness. It lightens up the mood but it can feel like a little too much. This isn't to say the book should be dark and brooding but it's still a matter of getting used to it. Who would've thought the Silver Surfer would try to crack jokes?

Dan Slott and Mike Allred's SILVER SURFER isn't your typical comic. They are pumping in some humor, mystery, and suspense while allowing us to see the Surfer in a slightly different fashion. For a character that's been around as long as he has, it's a nice change of pace. Slott is known for injecting his humor into titles. It might feel like a little too much at times but can you really complain over having a smile put on your face? Mike Allred art and Laura Allred's colors are something I never get enough of. There's also a mystery that's building and wait until you see that last page. What the heck is going on? I can't wait for the next issue. 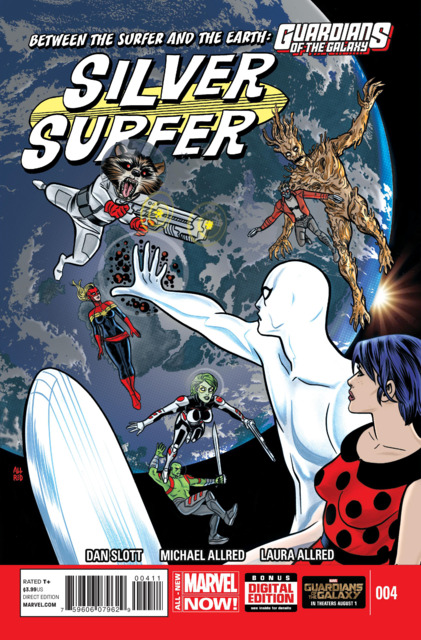