Silk gets some downtime and finally gets a diagnosis.

What a roller coaster ride Cindy Moon’s been on for the last three issues. Between breaking out on her own, trying to forge a life and find her family’s whereabouts, there’s barely been time to breathe and take in the sights of New York! Or find out exactly why Moon’s powers seem to be on the fritz. But thanks to some friendly-neighborhood Spider-Snooping, she’s now in the hands of the Marvel Universe’s foremost authority on all things superpowered. And basically all things in general. But Reed Richards’ diagnosis proves unexpected and unexpectedly real. Robbie Thompson gives the feeling of writing from real experience with a topic that’s sensitive without being too touchy: anxiety. Portrayed about as accurately as things like depression or gunfights in popular culture, Thompson begins a slow journey through Cindy’s mental process of deciding whether or not she’s got anxiety despite the fact that she doesn’t perceive herself as “an anxious person.” Oh and there’s a date with the ever-dreamy Johnny Storm in the mix as well. Thompson keeps the dialog light and witty, but weaves in plenty of serious undertones that can easily be dealt with later, and of course leaves on an eyebrow raising moment that’s sure to have some dire consequences.

Stepping in for Stacey Lee on linework is Annapaola Martello, a name that hasn’t graced the cover of many comics, but will hopefully be on many more. Her linework is incredibly stylized, fitting the kinetic, wild energy of this issue to a tee as well as giving the characters’ big, exaggerated facial expressions. It lends the issue a melodramatic tone, but that’s not inherently a bad thing. Ian Herring’s color work also takes on a sketchier feeling, but he’s good enough that no sense of the richness of the world is lost.

There’s a downside to the manic pace of this issue, and that’s that it feels ALL over the place. While the art compliments that tone, there’s still the sense that any one of the storylines and subplots could have been cut, or at least cut down, and the issue could have had a more tight, coherent sense to it. What’s on display is fantastic, it just would have been nice to have gotten a bit more of each thing, rather than a tiny bit of all of them.

Additionally: Stacey Lee is credited on the cover while Martello is credited on, and provides, the interiors. This didn’t affect the score as Martello does a fantastic job, but it’s worth mentioning.

It’s good to start getting a sense of how others perceive Silk, particularly if she’s going to be sustaining her own solo series, but it’s even better to start get a better sense of how she perceives herself. There’s been a lot of great reactionary events in the last three issues, but this is the first time when her sense of self really feels like it’s calcifying, and it’s making the character even more intriguing. Though the frantic pace of the issue makes it sometimes feel like she needs a breather from this breather, it still does a great job continuing her character development. 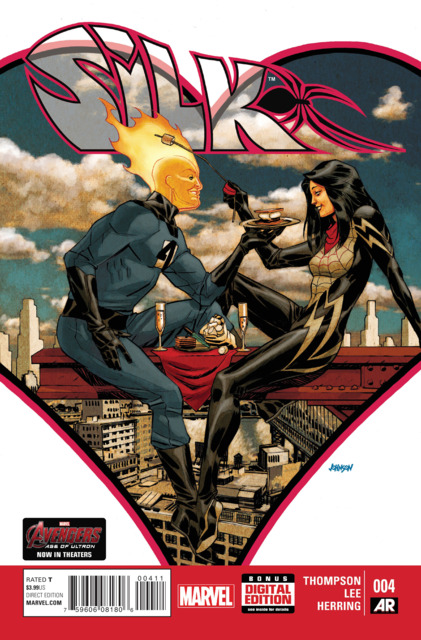