Silk is back but why the heck has she become evil now?!?

I’ve said it before but when I first heard about the idea of a new Spider-character being introduced who happened to have been bitten by the same radioactive spider as Peter Parker, I rolled my eyes a little. We have a bunch of Spider-characters already and many female ones at that. What would make Cindy Moon different? Turns out almost everything.

From the moment it was first revealed she had spent ten years isolated from the world, you couldn’t help but feel sympathy for her. Seeing that her power set was a little different from Peter’s was intriguing. Now that we’ve gotten to know her, it’s a joy to see her story continue.

Some time has obviously passed since her previous volume and the end of Secret Wars. Cindy’s day job has changed a little but the main kicker in the series is the direction she’s headed as Silk. She is no longer out acting as a hero. Instead, she’s working for her recent big nemesis, Black Cat. At the same time, Cindy still is trying to figure out what happened to her parents and is dealing with helping her brother through his recent ordeal. This change for Silk and what it all means gives her a little more to do. She's not just another hero swinging around looking for bad guys to stop. Now she's on a mission.

Of course there is more to the story than there appears. Robbie Thompson is continuing Cindy’s journey. Despite some time passing, it feels like the story hasn’t skipped a beat. Stacey Lee's art is perfect for the book and character. Seeing Silk in action, you can't help but grow to like her more and more. Even if she's mixing it up on the wrong side of the law, you'll still be rooting for her.

SILK may have had her beginnings spun out of the pages of AMAZING SPIDER-MAN but she's proving she has what it takes to carry her own title. With a different background and a new direction being a 'bad guy' along side Black Cat, we're seeing some interesting changes which will keep you glued to each page. With her new career move as Silk and the continuing developing of her personal life, we're really getting to know who Cindy Moon is. Robbie Thompson and Stacey Lee are on fire. Read SILK and find out why she'll be one of your favorite new characters in the Marvel Universe. 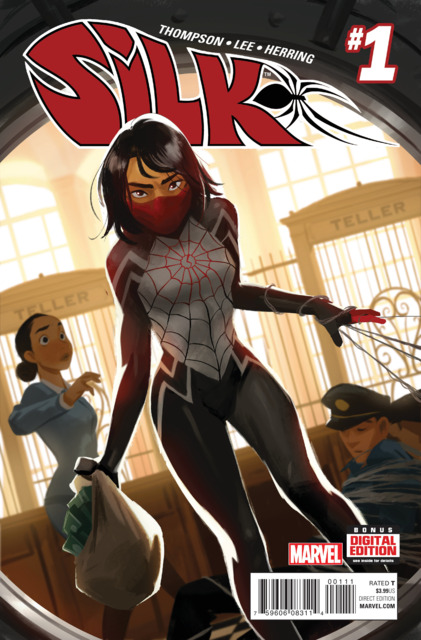