Cindy Moon explodes out of the Spider-Verse and into New York!

When Silk first burst out of her bunker at the beginning of the post-Superior Spider-Man, it wasn’t clear what her role would, if any, be in Spidey’s world. Though it fast became clear the two had some chemistry, both literal and figurative, introducing this new, dynamic character, only to have her join the Parker Support Brigade felt like a waste. It seems, however, that the folks at Marvel had other ideas as SILK #1 has debuted, and while Spidey features in it, this is definitely Cindy Moon’s story. We pick up directly after Spider-Verse, with Silk battling a new villain in the form of the Pokemonish Dragonclaw. Things go quickly awry as her danger-sense is apparently on the fritz, either as a result of her recent massive battles against the Inheritors, or because it isn’t properly calibrated to work outside the bunker she spent a decade in. Robbie Thompson’s got his hands full introducing this character while simultaneously catching people up on what she’s been up to currently, and where she’s come from. Thompson zeroes in on what makes Moon unique, and a big part of that is her deteriorated social skills due to a decade of being locked away, which is played as both strength and weakness. We also get flashbacks to her life before the spider bit her, and this is where the issue really shines: the teen angst here may not be 100% true to life, but it feels at the very least genuine. Thompson also eschews the usual “shattered home/awful life” superhero trope in favor of some run-of-the-mill drama about pressures from school and a social life interfering with them.

Stacey Lee isn’t the most well-known name for interiors, but it’s a name destined to rocket to the top of art requests based on what I’ve seen here. We get a style that’s not quite manga, not quite realistic, but a tremendously effective merging of the two without seeming too derivative or too dull. The linework on display in this issue possesses an incredibly fluidity that makes the action, and traversal, not only easy to follow, but actually fun to follow. This is a book that, based on this issue, won’t be taking itself too terribly seriously, and Lee’s art is versatile enough to inject a sense of whimsy, but knows when to pull back from more dramatic, introspective moments. Ian Herring handles the colors, and does a beautiful job bringing Lee’s New York to vibrant, colorful life, as well as tinting the flashbacks to let the reader know when one transitions into another.

As a result of how much new readers may need to know, and how much apparently needs to be done in this first issue, the narrative here is all over the place. Flashbacks begin and end with little rhyme or reason, and Silk seems to traverse New York, and various scenes, in what seem like seconds. The action’s not difficult to follow, but it IS sometimes confusing to see what takes how much time.

This is a strong introduction to a new character, and while she may be based on a pre-existing one, at the very least that gives her a foundation for fans to already know about, and be intrigued by, her, which will hopefully lead to this book taking off. The creative team is new, but they’re incredibly strong, and it seems unlikely that anyone picking this issue up to peruse it would be able to put it back down. It’s got its flaws, but those seem to mostly be giving the readers too much all at once, which is easy enough to correct. This is a solid debut for an intriguing character. 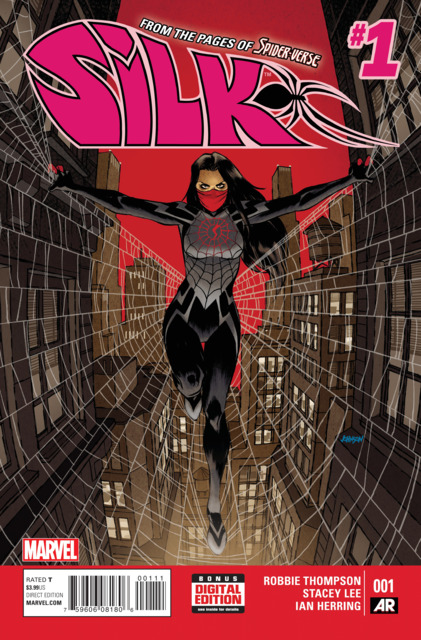