You've probably read "survival stories" before but you haven't read anything like this.

The first issue of this series came out of nowhere. Ed Brisson introduced us to a small community where people were stockpiling food and weapons out of fear that the world society would go bad someday. In their preparation for the worst, there was one they didn't see coming. The ending to the first issue is something that has to be seen.

With this issue, we're finding out more of what went into those events. There's still some unanswered questions and motives which adds to the suspense of the story. Even though we've barely had a chance to get to know these characters, there are some you will immediately focus on as they try to figure out the situation. Parts can get a little disturbing but not in an overly graphic way. It's more the tone and the situation that has been created.

Johnnie Christmas' art and Shari Chankhamma's colors fit the story perfectly. It definitely has it's own feel which is great in making this series feel fresh and exciting.

Comics can often get lumped into certain categories but with the story and art, this feels like it deserves its own place.

After the shocking ending of the first, it's hard not to have high expectations here. There is some aftermath and follow up from the first issue. Most of this is spent in the 'clean up' of the events. It's hard to get a feel for where the series is going next but that's not necessarily a bad thing.

SHELTERED is a comic doing its own thing. It could maybe be categorized as a survival story in some ways but Ed Brisson and Johnnie Christmas have set off to give us a fresh and unique story. The rug has been pulled out from underneath us and it's rare to have a comic catch you off guard like this. As we see the story unfold here, it's hard to determine what direction the series will take. It's a little hard to be concerned because there is the need for this series to continue to be so cool. If you're looking for something new and exciting, make sure you're reading this series. 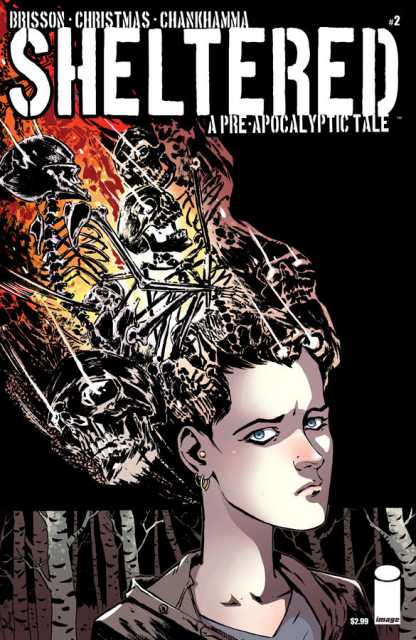