Jennifer Walters battles her greatest foes yet: a bunch of housecats.

Javier Pulido is BACK! And with him comes the tone of a throwback, Silver-Age comic with modern sensibilities and mentalities, bringing us the best of both worlds. Part of that is, of course, Charles Soule crafting a story absurd enough to deserve visuals like this, but still organic enough to fit into a modern setting, and Soule absolutely succeeds here. A new upstart duo have perfected a shrink ray, at least THEY think it's perfect, but their company is owned 50/50, and half of that hundred doesn’t want to sell to the prospective buyer. He’s gone so far as to shrink himself and hide out, forcing his partner to hire Jenn to not only negotiate a contract, but use her Hulk powers to help find his partner. Hellcat comes with, as does expert shrinker Hank Pym, leading to some of the best comedy of the issue. We also get some great character development as Patty Walker’s insecurities and Shulkie's prejudices and even arrogance get challenged in what is a legitimately great, tense exchange. That this is in the midst of so many moments of amazing comedy, yet still works completely in the issue, is a compliment to writer and artists.

Pulido’s return to linework is a joy to see, especially as we’re now dealing with things like scale and perspective, as I predicted, and we get great use of that. The stakes have shrunk along with the protagonists: the fate of the world isn’t being decided and while lives hang in the balance, there’s the distinct impression that things will work out, which means the art actually has to work quite a bit harder. The fact that it DOES, and that it gives the reader the impression that this was unearthed from the Marvel vaults, is a testament to the great work of Pulido. With as much as he does, I’d be remiss to not mention colorist Muntsa Vicente, who brings a bright, whimsical sense of wonder to Pulido’s linework. A simple backyard has scarcely looked this impressive, nor have the tiny and giant denizens of it. We even get a great, if brief, fight scene with some ordinarily mundane attackers. The return of these visuals is a delight.

For better or worse: this is a highly standalone issue. It’s a good jumping-on point, but that’s by virtue of it neither coming nor going in terms of the overall plot of the book, and with so many questions unanswered, there’s a slight twinge of frustration to that.

While I’d love to have a few more questions answered, or a few more mysteries solved, it’s hard for me to turn down a straight-up, standalone story about unstable shrinking methods. There’s a grinning glee that permeates this entire issue and it’s bereft of irony or sardonic detachment. This is, very simply, an incredibly fun issue of an incredibly fun book. It doesn't apologize for that, and it brings on artistic talent to make sure that the tone is communicated in every panel. Fun books are one thing, but this feels like a fun book that was unearthed from a time capsule AND turned out to be vastly ahead of its time. 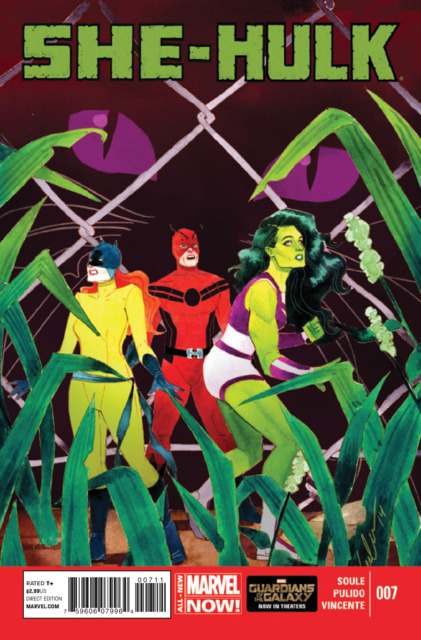