Jenn Walters has opened her own practice, but she didn’t exactly leave the old one on the best terms. Can an old friend help bring some light to the office, or will she hinder more than she helps?

I am absolutely enchanted by this book and its all its weird little quirks. Despite writing approximately 136 titles (give or take a two), Charles Soule definitely seems to be onto something special with this one and it contains an inordinate amount of heart. We see Jenn preparing to interview a series of applicants for the job of secretary, but after the pool is mysteriously reduced, she winds up hiring a strange woman with the strange quirk of having a pet monkey she demands to take everywhere with her. Nothing suspicious here...then we get to see Jennifer hit the town HARD with one Patsy Walker, AKA HELLCAT! That’s right, THE Hellcat!....whattya mean “who?!” I always love a comic that isn’t afraid to play with the very real idea that some superheroes just don’t rate. Robert Kirkman’s League of Losers storyline is one that I reference often and with good reason. It takes a realistic look at the fact that not every superhero can be Spider-Man or Wolverine, some of them definitely slip through the cracks and this book continues that proud tradition. There’s some ridiculousness with A.I.M. at a warehouse that actually turns surprisingly serious near the end, and here’s where Soule’s writing really shines through: this isn’t JUST a book about having a laugh and a good time, there are some amazing characters at its core and he writes both sides with equal skill. We get the start of a few great mysteries that I can’t wait to explore further.

Javier Pulido is a highly polarizing artist on this title, but as of this issue you can count me among his believers. His linework on this book is nothing short of incredible and a large part of that is that it’s difficult to pigeonhole. It’s not exactly a “throwback” in the way that someone like Howard Chaykin can be (and he’s less a throwback than a legit oldschooler) or when they indicate a flashback by using dots to shade, it’s a very, very modern looking comic...but it also, somehow, looks like something out of the ‘70s. The layouts of off-the-charts amazing as well, using splash pages to give a sense of scale as well as strange goings-on. The characters are extremely two-dimensional, but not for lack of detail nor plainness. It’s actually VERY difficult to quantify! A gargantuan part of this certainly falls to the colorist Muntsa Vicente, who uses strong, rich colors to highlight both the surrealism of the general happenings of the title, but also to make the focus rest where it needs to. This is a beautiful book from top to bottom.

There’s basically nothing to dislike about this book. The art definitely isn’t for everyone, but it is for me.

This book is more than whimsy, it’s more than simply happy, it’s reveling in its own surrealism and wonderful sense of bizarre humor. The art and the writing gel perfectly to give it a weird sense of humor. She-Hulk has always been at her best when she’s having fun, and even better, as a lawyer and we are 2 for 2 on that being the focus of this title. Which is precisely where it needs to be. 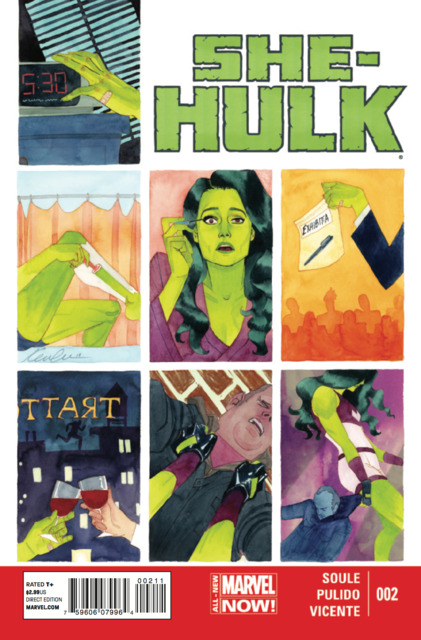