The end is here. How much does the finale to Marvel's big event deliver?

Secret Wars has been both a great and frustrating event at Marvel. Many are focusing on the release schedule and delays. Yes, delays are unfortunate and having the All-New, All-Different Marvel titles begin before the story took away some of the impact. Focusing on the story and issue, you have to admire what Jonathan Hickman laid out for us.

When looking back at the story, it's important to look beyond just these past nine issues. Hickman's story started before SECRET WARS #1 and you could even go as far back as his FANTASTIC FOUR run beginning in 2009. Hickman packs in quite a bit in this oversized issue. This has largely been a story about Doctor Doom but we see some of the other big characters confront the self-appointed god as they try to put an end to his rule.

There is a nice mix to the issue. We see some nice battles and confrontations, but there's also the exploration of the events and bringing it all to a close. Prior to reading the issue, you know it all needs to be wrapped up. We have a pretty good idea of the state of the Marvel Universe. Readers do get a couple questions answered dealing with some of the developments or mysteries seen in the All-New, All-Different Marvel issues. Reading the issue a second time really made me appreciate the full scope of the story and how it marks the end of Hickman's story.

I've been a fan of Esad Ribic's art and Ive Svorcina's colors throughout the issues. Even with delays in the schedule, I'm thankful they were on board with every single issue. They gave us some really great scenes and this will be a story that reads well once it's collected.

The SECRET WARS finale has arrived and it delivers on many levels. Despite the release schedule of this series with the newer Marvel titles debuting and moving past all the hype, it's a satisfying read. Jonathan Hickman has crafted an epic story that goes back several years. Keeping his run at Marvel in mind, you can see how this is a great ending to the story he started years back. It's not often we see comic book events maintain a high quality throughout. Ribic's art and Svorcina's colors have shined throughout the series. This is a story I will definitely read again. 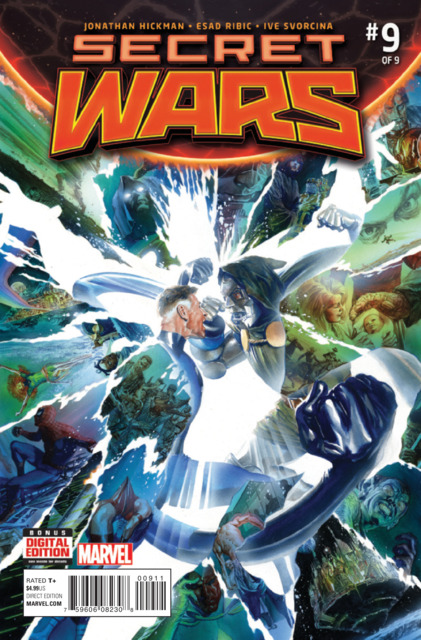