The end is almost here. The battle rages on against Doom.

The penultimate issue of SECRET WARS is here. The fight is continuing to escalate. The story is building and reaching the grand finale. We have some of the surviving heroes from Earth-616 and Earth-1610 fighting as Doom's Barons are fighting each other. Some are making their move against Doom. Basically, there's a lot of fighting going on all over the place. For a book with WAR in the title, this is what you would want and expect. The early issues were a little light on the fighting and as we approach the end, we're getting that payout.

Jonathan Hickman has been setting up the story and we pretty much see all the players on the stage here. We know the ending is coming and we're getting tiny glimpses as each character is slowly being moved into their final position.

While there are some cool moments and see the story progressing, it doesn't feel like its moving forward a huge amount. Originally the series was set at eight issues. An extra issue was added to fully tell the story. While I'm grateful we get to see some of the moments that occur here, it almost feels like we're not much further compared to where issue #7 left off. As much as you try to overlook the delays, there's no denying that they are affecting the momentum of the story, especially as we see more All-New, All-Different Marvel titles being released each week. We're still highly looking forward to the ending but the longer we have to wait, the more that excitement starts seeping away.

Despite these complaints, Esad Ribic's art and Ive Svorcina's colors makes each of the moments even more glorious than you would expect. You'll want to pause and simply admire some of the pages. We do get some really really cool moments here. The big question is, will the fighting continue in the final issue or is this all the build up with everything getting tidied up in the finale?

The biggest problem with SECRET WARS has been the release schedule. Normally I try to overlook delays because the wait is usually worth it. No one wants a rushed script or fill-in art. With an extra issue added to the overall series on top of the delays, the momentum and flow of the story is being affected. This could be more of a reason to read it all in one sitting once it's collected. The end is near. We're seeing all the characters getting set up for the finale. There are some great moments here but I can't help question if they're all fully necessary to move the story forward. At the same time, it's great we get to see them. It's hard to predict what Jonathan Hickman might have planned for the end. Unfortunately seeing the new Marvel titles being released has been giving us a slight idea what happens to some of the characters. Throughout SECRET WARS, we've been treated to great art and color. The visuals make the wait between issues worth it. Let's just hope the end of this story truly blows us away. 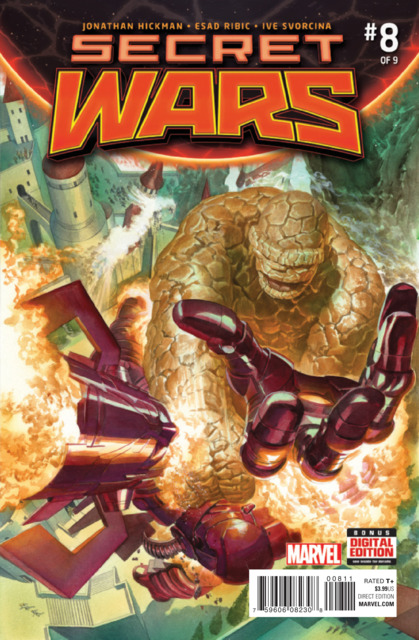