After the clash between two universes, there is now only Battleworld.

The first issue delivered great battles and moments between the 616 universe and the Ultimate one. Despite the fight for survival, the outcome was inevitable as the incursion hit and we were left with a bit of a cliffhanger. Now, rather than continue the series (as a feared) with more battle after battle, we start to see the story fleshed out in a different direction. With the introduction of Battleworld, we're seeing it's time for a whole new game.

Jonathan Hickman could have taken the easy route with the set up of Battleworld. The idea seemed like it would just be a bunch of different timelines or versions of characters slapped together. Hickman gives it much more depth than that. He truly creates a world and sets up the 'god' that oversees it all. You get an immediate sense of history rather than the idea of this being something created moments ago. We do see several familiar faces but Hickman makes it something different. He takes full advantage of the opportunity to make some changes with the characters. The little glimpses we get makes you want to see more.

Once again we are treated to the gorgeous art by Esad Ribic and colors by Ive Svorcina. The visuals are a great mix of the familiar characters combined with the new themes Hickman is laying out. Even with the oversized issue, you'll feel yourself pulled in deeper hoping your visit to this comic book world can last even longer.

There is a slight, "What's going on?" feeling at the beginning. Obviously something has happened between last issue and now. As the story moves forward and we see 'God Emperor Doom,' it starts to become clearer. This is something that will likely be further explored in coming issues.

There's so much to see here. It's not just hero fighting hero. The other areas of Battleworld are being set up but there's a deep story going on here as well. Hickman, like the 'god' character we see here is creating a fascinating story with the idea of Battleworld and how each area relates to one another. The more you see, the more you want to see. Hickman makes it hard not to be excited. Esad Ribic's art and Ive Svorcina's colors gives this a great vibe. If you are craving more big fights, it looks like you'll be getting some of that as well as Hickman continues to set the stage for big things. 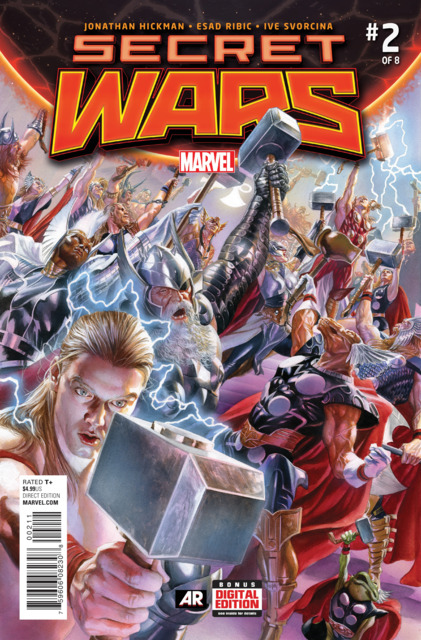