Ales Kot has been doing some interesting things in this title. We saw at the end of the previous volume that M.O.D.O.K. decided to leave A.I.M., share secrets with S.H.I.E.L.D., and even work for them. With each appearance in this series, we've been seeing there just might be more to M.O.D.O.K. than we thought. Obviously he's not someone you can trust. In this issue we discover that Maria Hill is fully aware he cannot be trusted despite playing a big role in allowing him to get in closer with S.H.I.E.L.D.

Kot gives us a lot of answers here. We see various flashbacks leading up to M.O.D.O.K.'s arrival and some that explain recent events in this series. There's something fascinating about M.O.D.O.K. and Kot adds to his character. You might see what's coming up on the last page but that doesn't prepare you when you actually see what M.O.D.O.K. has to say.

Along the way, we see some creepy things concerning M.O.D.O.K. Michael Walsh continues to do a stellar job on this series. As for creepy M.O.D.O.K., seeing him sitting on a beach, drinking a glass of wine is just disturbing. Kot captures each moment nicely, showing different sides to M.O.D.O.K. Walsh excels at giving us subtle signs of emotion on the characters' faces. Even scenes of a simple conversation between Hill and Spider-Woman or M.O.D.O.K. and Snapper, his assistant are intriguing and don't have a flat static feel we sometimes get in comics.

And you have to absolutely love that Tradd Moore cover.

We are getting some answers but this issue's focus on M.O.D.O.K. and Hill gives the series a slightly separated feel from the rest. We still haven't had a full update on Nick Fury Jr after his attack (there is one mention). The same goes for Black Widow. Just a mention over her disappearance and possible "death." Last issue had a lot of Hawkeye (and Deadpool) but there's no sign of them here. We also don't get any updates on Coulson either. This is one of the downfalls of team books, especially when there's a smaller core cast. It feels like we're left hanging wondering what else is going on.

SECRET AVENGERS continues to operate on the outskirts of the Marvel Universe. Ales Kot is cooking up some strange and fascinating plot threads. Having an issue with a big focus on M.O.D.O.K. is simply amazing. He is often portrayed as more of a novelty when it comes to his appearances but Kot is fleshing him out in bizarre and wonderful ways. Michael Walsh's is art captures the vibe Kot is setting up. You can feel the secrecy going on and it's always a treat to see how he lays each scene out. There is a slight disjointed feel as we don't see the other main characters from this book but the abundance of M.O.D.O.K. makes up for it. You just might not look at M.O.D.O.K. the same way after this. This is my favorite AVENGERS title. I can't get enough of it. 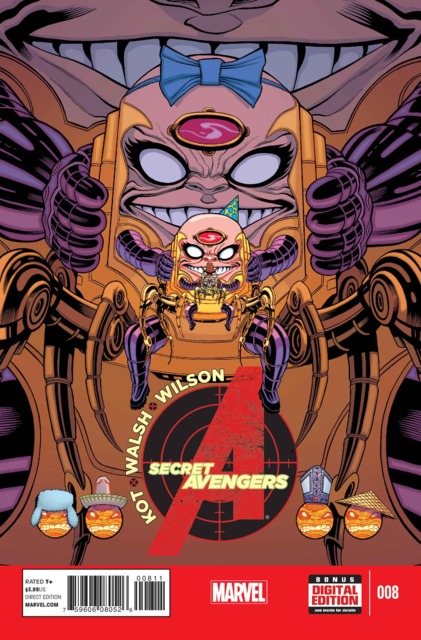