After some crazy missions, things are a little up in the air for some members.

This series continues its mix of Avengers working on S.H.I.E.L.D. missions. What separates this from other Avengers titles is espionage angle and feel. Maria Hill is a woman of mystery. She's holding back a lot of information and that's something that could explode in her face. The idea of these heroes going on different sorts of missions than we've normally seen is a nice change.

Of course the biggest time bomb in the book is the inclusion of M.O.D.O.K. Hill is trying to keep his involvement with S.H.I.E.L.D. from the others. The more important question is, can he be trusted? Ales Kot delivers the drama and sprinkles in a good dose of humor. We get a chance to find out a little more about some of the characters and seeing them during their downtime is always an interesting idea.

I absolutely adore Michael Walsh's art. In the past he's dazzled us with his layouts and action scenes. With the action toned down, the focus is more on the individual characters. Walsh adds a nice amount of detail in their body language and expressions. Matthew Wilson's colors complements the art in big ways.

Down-time is important. We've had some crazy stories and it's enjoyable and enlightening to see the team not in the heat of the battle. But the lack of action does leave you longing for a little more. Parts of the story feels like it jumps around a little as we go from character/situation to character/situation.

I said it before and I'll say it again, this is my favorite AVENGERS series. Ales Kot gives us a great mix of action, espionage, humor, and superheroics all in one comic. Michael Walsh and Matthew Wilson's art and colors always impresses. There's a lot of secrets being kept from the rest of the team and the series is living up to that angle. There's no telling what will happen next and that feeling of suspense is what keeps me coming back for more. That, and M.O.D.O.K., of course. 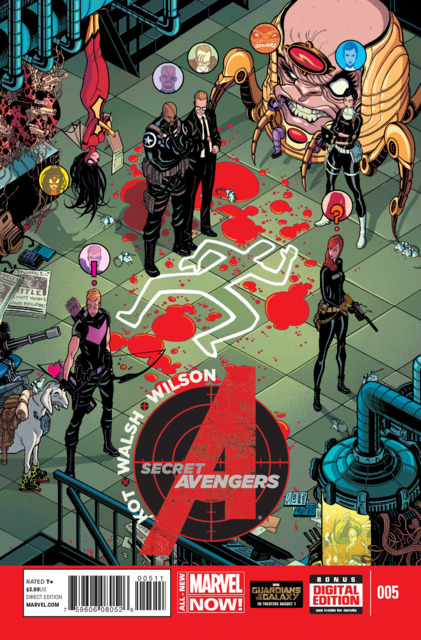