It starts out with a mystery and ends up with Elektra and a bunch of ninjas. Zeb Wells and Joe Madureira are off to a great start. Spider-Man's here too. And he's funny.

Whenever it comes to issues or arcs involving different characters, an immediate question may be "Where and when does this story take place?" To answer a question that many may have right away, there is an editor's note that states this takes place a while back. That means it's our beloved regular Spider-Man.

The first thing you'll notice is Elektra in action. Zeb Wells sets up a great scenario which allows Joe Madureira to show her in action. The grace and fluidity he gives her is amazing. Well, it's not all graceful as there is some violence and butt-kicking as well. I can't remember the last time seeing someone smash an elbow in someone's face looked so good. The way Madureira draws Elektra's scowl is enough to make you shiver a little and give her the respect she deserves.

It's interesting to see and be reminded of the interactions Wolverine used to have. We've seen him on different teams and Wells makes it clear that Wolverine is a loner by nature. It's amazing he can be on so many different teams when that's just not who he is. The way Wells writes a scene with Wolverine and Spider-Man is classic. In the midst of a scene with a serious tone, you can't help but chuckle over the little bits of humor Wells subtly inserts.

The scenario set up that unites Elektra and Wolverine is interesting. It's great seeing the tiny mentions of their past and shows Wells knows his comic history. The two do make a great pairing and Joe Mad's art makes it look that much better.

This is a comic where you just have to sit back and enjoy the show. Being the first part of an arc, it does have to set things up. There is a sense of mystery and we don't have all the answers. Some of the underlying facets may not be completely clear just yet but it will be fun seeing how everything unfolds.

Yes, the editor's note said not to worry about continuity. It wasn't bothersome but almost entertaining seeing different overlapping items occur. Whether it was because his other costumes were in the wash, it was great seeing one of Wolverine's (and best in my opinion) costumes. You start to wonder if we should have more stories like this. We're not just talking about Wolverine and Spider-Man's continuity. Other titles could be affected as well. Regardless, it's shaping up to be a fun read.

I love Joe's art but there were a couple minor issues. One that really stood out for me was when Wolverine, Elektra and Kingpin were in the same panel. I'm still in favor of Wolverine being 5'3" so he should be shorter than Elektra. Marvel.com states she's 5'9". And Kingpin…he looked a little weird here even though his scene earlier was pretty cool.

Comics do not have to be completely serious all the time. Zeb Wells and Joe Madureira are off to a great start here. By not making this just a Wolverine story, the fun and excitement are cranked up. Seeing Elektra is always great. Throwing in Spider-Man and ninjas makes it even better. We shouldn't worry about continuity here. It might be hard given some incidents in other titles but knowing this is just a story to read and enjoy, it's a bit refreshing. Comics should adhere to some sort of continuity but this allows us to take our shoes off, sit back and just enjoy a fun and suspenseful comic with some really great art. I can't wait for the next issue. 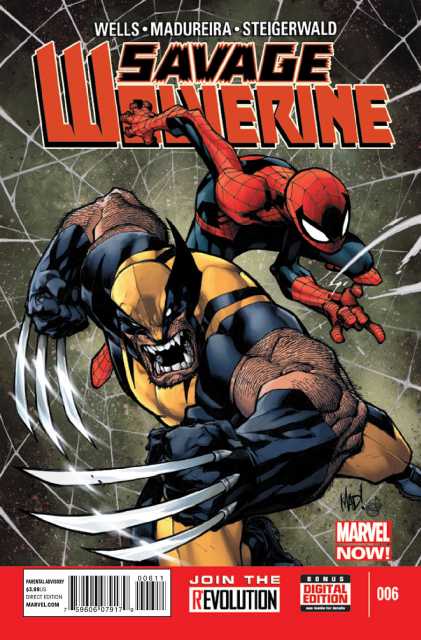