There's something delightfully old about SATELLITE SAM. Perhaps retro is the better term, since "old" has a connotation of staleness -- which I wouldn't apply in the slightest to this title. It's not just the setting; every single aspect of this book has been carefully vetted for its place in time. Banter is appropriately sharp yet polite. Dress is a little bit more formal. Television is a strange, sexy, ugly animal.

But retro itself evokes a sense of kitsch, and SATELLITE SAM, despite the ostensible cheesiness of television serial dramas, is quite a departure from that aesthetic. It's darker; there's something viscous bubbling under the gaudy surface. That the big reveal of the issue was that a popular evangelist personality had a dirty, sexy secret -- and supporting photographic evidence -- is incredibly telling. It keeps things true to the time (are that sort of photos nearly as scandalous now? I'm pretty sure one can still run for mayor despite them), but adds a layer of conflict under a seemingly-operational situation. Subversive. I like it.

Overlaying the dialogue from the new Satellite Sam show on bleak images from Carlyle's funeral shows us just how dark Fraction and Chaykin are willing to take us. It's the comics equivalent of Patrick Bateman listening to Huey Lewis and the News as he murders someone; saccharine pleasantry atop the grim reality of death, and its associated consequences. A funeral isn't the place for kitschy serial TV, and yet, in this case, it's the only place for it.

I don't know where the story is heading. I thought I did; I thought the first issue might just luck out and be gloriously transparent, but it isn't, and I don't actually want it to be, because the delicious thing about serial TV is that you can't even tell what's going to happen next. There is no studio audience, but there might well be a fountain of youth, and that's why we stick around, isn't it?

A chief difficulty of running a strong black-and-white comic is keeping distinguishable, recognizable characters. When many of the men have similar haircuts and styles of dress, it can get a little bit soupy, and otherwise dramatic moments can lose a little bit of steam due to "who's he again?" syndrome (thankfully, the women in this book are still extremely unique). Sans the luxury of hair colors and outfits that "pop," it's on the creators to make every member of the cast unmistakably distinct in voice and silhouette, and it's on the readers to keep up.

SATELLITE SAM came in strong with a unique and decidedly sensational first issue, and while the pace has slowed down a little bit for the follow-up, the drama and tension have only ramped up. There's a thick soup of venom, lust, and mutual disrespect sloshing into the world of this book, and it's almost an underdog story if you're on the side of the TV show (since the cast and producers themselves push the boundaries of "deplorable" on a regular basis!). Read it. Get hooked. Hooked like Mikey is on the sauce (I promise this book is healthier!). 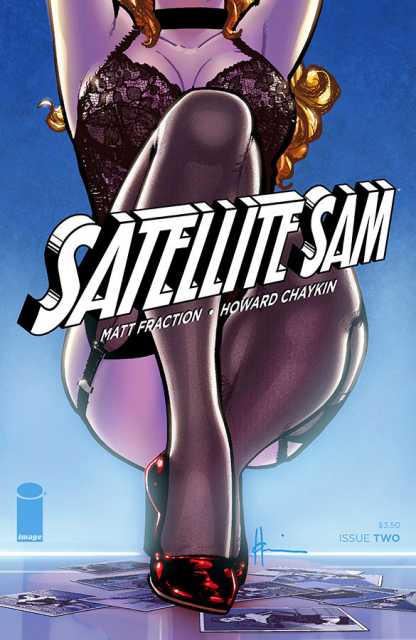