Samurai Jack #2 - The Threads of Time

Enter Dis and Dat, a pair of synchronized martial artists! How can Jack hope to defeat them?

"No one here but an innocent ol' bag o' gains. Pay no attention..."

Samurai Jack's search for another thread of time leads him to a village which is "protected" by dangerous twins. Jack then sits down and has a peaceful discussion with them before they decide to kindly hand him the thread. Just kidding, they're arrogant and love to fight, so obviously they challenge Jack right from the get-go.

Jim Zub uses the same formula from the first issue: Jack finds an interesting location, said location has a thread of time, Jack must defeat wacky characters to obtain said item. This could be problematic if it doesn't change in due time, but for right now, it's an absolute blast. The last issue was unique because of the variety of characters Jack faced, so how do twins provide a challenge when he's already faced a large group? Great question. You see, these twins are perfectly synchronized, so it's a total pain to fight them. Plus, they have wonderfully obnoxious personalities. It's cheesy, but it's clearly aiming for that and the end result feels like something stripped right from a fun episode. Zub also addresses one small plot point ("how will he find each thread?"), but for the most part, there isn't any strong plot progression and it's just a really entertaining skirmish.

I'm enjoying the visuals by artist Andy Suriano and colorist Josh Burcham a good deal. They duplicate the animated tone very well and the variety of expressions the characters make are hugely amusing and a few are even downright priceless. The locations all look solid, everything is brought to life with bold coloring and the attacks in the fight are every bit as exciting and fluid as they should be. Your eyes will be pleased with this one.

Seeing as this is pretty much one big action scene and there isn't much plot development, this second issue is a pretty quick read. So, if you were hoping this chapter would take big steps to flesh out the narrative, odds are you'll be disappointed. However, if you're cool with sitting back and simply having a good time, it's sure to deliver.

Very minor gripe: there's one panel where Jack's finger is absurdly long. It's basically bending where it should end.

Did you love the first issue? If so, it's safe to say you're going to love this one, too. Jim Zub fills the book with action and compliments the chaos with such playful dialogue -- it basically feels like a cartoon, and that's absolutely a good thing. Seeing as 5-stars technically means a score of 9.0 to 10.0, I'm more than happy to give this issue all 5 of 'em. It's just a whole lot of fun. 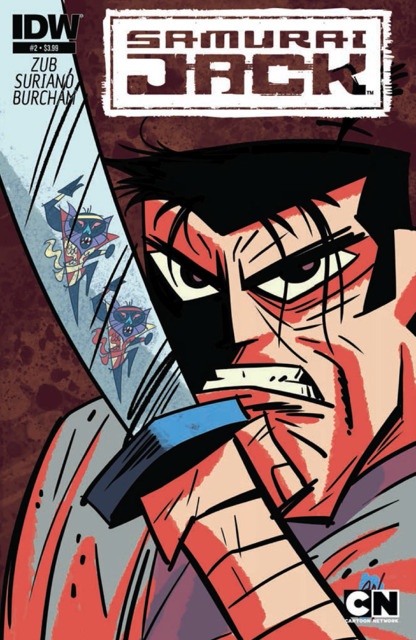