Will Del's brilliant plan save Rathraq or will they need to find another way to survive?

RUMBLE #4 is another chapter that proves John Arcudi, James Harren, and Dave Stewart's Image series is the perfect blend of rich fantasy and pure fun. When you have a big fire dude looking to take someone out, many comics out there would turn the conflict into this lengthy and epic brawl. There would be splash pages, serious back-and-forth as the fight goes on, and it would feel larger than life. Here, it's handled in a way that's just overflowing with personality and it doesn't take away from everything else that's going on. The visual team makes the encounter a ridiculously fun thing to witness as a giant sword is swung around, a massive fireball is generated, and it ends in a way that's pretty much guaranteed to make you laugh. If not, well, you're one tough customer. I mean, the expression is priceless! They could have gone for a serious and epic conclusion to the fight, but instead the offered a sample of that and then transformed it into a great bit of humor. And that's pretty much how everything goes down in this comic.

It's not a comedy, but it manages to construct its world and characters in a way that'll also get you smiling. Whether it's a more intimate and deep moment with Rathraq or someone dropping some exposition ("are you listening?"), the script here is top-notch. There's one moment that seems like an overreaction, but this comic is constantly informing us about its unique universe, giving us insight into characters, or offering a simple dose of fun. It really feels like they don't waste any time here. This one may not be as informative or gripping as the others, but it's still such a good time.

The script is oozing with character and the visuals are every bit as exciting, energetic, and full of personality. The expressions -- especially with Nusku -- are such a strong selling point and the art team puts a whole lot of effort into creating fitting atmospheres for each scene. This chapter jumps between a few locations and faces, but for me, the visual highlight isn't the brawl; it's the bit with the dog. I love the way the scene is laid out and all of the character work was really effective. It's only three pages and brings nothing substancial to the overall picture, but it's an unexpected move and accomplished what it set out to do: make me care for Rathraq just a little more.

It's a great issue, but it isn't that big of a deal for the plot or the characters. There's a step towards Rathraq getting his body back -- one which is primarily buildup -- and the big takeaway here is learning more about the creatures' physiology. Again, it's all entertaining and teaches us more about the world, but it's the kind of issue that'll probably fit better in a collection.

RUMBLE is without question one of the more entertaining stories around -- and yes, I say that as someone who isn't a big fan of the fantasy genre. The world continues to grow, the characters continue to amuse, and there's just enough action and comedy sprinkled into the more powerful moments. Thanks to consistently animated visuals and an immensely entertaining script, RUMBLE keeps winning me over and leaves me wanting more. 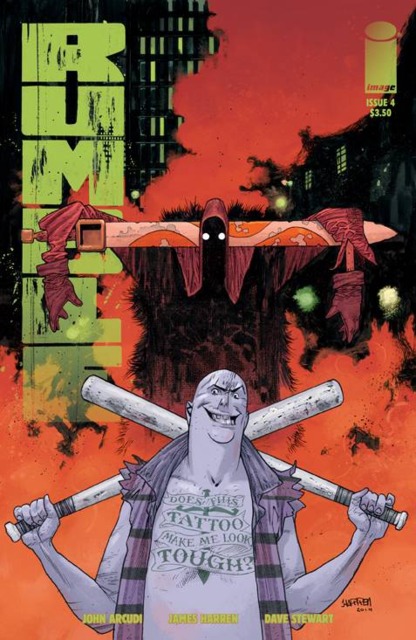