Who is Rathraq? It's time to find out!

I'll be completely honest here: I'm not the biggest fan of the fantasy genre. If a story that's rich in fantasy elements is going to win me over, it needs to be pretty awesome. Like, basically a Lord of the Rings level of greatness. Thankfully, John Arcudi and James Harren's RUMBLE has been an awesome tale and this third chapter has won me over even more.

This issue does a ton of worldbuilding and finally tells us what we need to know about Rathraq(!) and his interesting world. Such a heavy amount of exposition runs the risk of interrupting the flow of a story, but it works here because of the way it's presented and just how interesting and creative the origin is. Instead of just bringing us right into a flashback or having Rathraq plainly narrate everything we need to know, he charismatically tells the tale to Bobby and Dale. It's a lot to take in, so having it occasionally broken up by the two humans' commentary was a great decision. It's all so out-there and loaded with surreal elements, so witnessing Dale and Bobby's drastically different reactions to what they're hearing and where they should go next was a blast.

The look into the past full of clever and fascinating fantasy elements and the way it ties back into the present works especially well. I finally have a better connection to the mysterious lead, a better understanding of what's going on, and an especially strong desire to see how some elements will play out. It leaves me with a few big questions, but I'm assuming those will be answered eventually.

Harren and Dave Stewart's visuals have just as much personality as the script does. It's an animated style with exaggerated expressions and it breaths so much character into this title. From Dale's goofy looks to the various Esu, these two deliver big time with bringing these fictional beings to life. They also do a terrific job fleshing out these locations and making sure the actions are every bit as intense or vivid as they should be. There isn't much action here, but they make sure the little bit we do see is memorable. All in all, it's a fun style that fits the book and it's gorgeously colored. There's plenty of big, bold and bright panels to appreciate, but my favorite one is a simple and quiet moment that's reserved for the bottom-right corner of a page. There's plenty to enjoy, but that small space delivered all of the emotion it needed to. Sometimes less can be more.

No major criticisms. Well, I guess it's worth noting that you really need to read the first two issues to fully appreciate this one, but that's not something to hold against the third chapter of a series, is it?

RUMBLE #3 takes a small break from moving the story forward so we can better understand and appreciate everything that's going on. I know we're only 3 issues in, but the first two have been loaded with worldbuilding and mysterious plot lines, so briefly taking a step back to give us all of the mandatory information was a necessary step. Thankfully, it didn't feel like hitting "pause" on the story and told us mostly everything we need to know in a fun, fascinating, and exciting way. It offers a ton of information but it doesn't feel like an info dump. There's a whole lot of imagination and just enough personality, humor and action thrown in there, too. So, let's get ready to read more RUMBLE. Sorry, couldn't resist that one. But seriously, this is a title that deserves your attention. 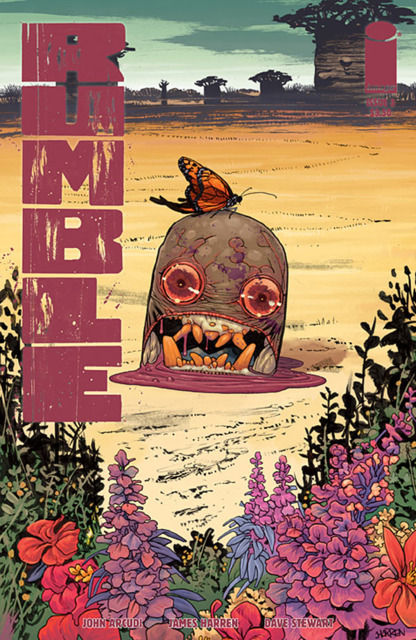