Even on a remote space colony, people are undeniably human.

The Roche limit is a real scientific concept, and it's a pretty fascinating one (we're talking about disintegrating stuff in space), so ROCHE LIMIT shows up to the party with some interesting connotations. In-universe, we're looking at a space colony named after the theoretical limit, but I'm certain it's no accident -- especially since ROCHE LIMIT is marketed as a sci-fi/noir title.

ROCHE LIMIT is a very designed book -- the cover, the blueprint, the backmatter. Tim Daniel's beautiful structure does two important things for the book: it makes the issue look polished, and it makes Vic Malhotra's illustrations look more expressive and lyrical. Crisp circles and thoughtful placement against the rawness of space; it's a great balance.

Langford's narrative is wistful and reflective, framing the series and setting an emotional tone right away. There's a sense of danger and regret that play into the science behind Roche limits. And for all of the sci-fi trappings, it's not unlike an old-fashioned noir; the narration is meandering and sprinkled with platitudes. It's a great way to segue into a story in media res, slowly fading into the present action.

Both the dialogue and the illustrations have a very natural feel. There's just enough dialogue to convey character and inform what's going on, but not so much that the art is overshadowed. Malhotra's pencils are stylized in such a way that the sci-fi atmosphere plays, but the rougher parts of humanity remain intact. There's a lot of characterization going on in the illustrations, and the bruises and scowls are as interesting as the wide-angle space shots.

A quick note: the solicit calls ROCHE LIMIT a trilogy, but it's not a three-issue miniseries. We're looking at three five-issue arcs.

There are a couple of scenes -- notably, the Recall hallucination and the last page -- that are interesting, but feel distracting from the main story. They're not bad on their own, but the shifts feel disruptive since the tone changes so much for such brief moments.

ROCHE LIMIT balances steadily-paced storytelling with high-action moments, and introduces us to a world that begs to be explored. There's an undercurrent of noir mystery, but the book is very much rooted in sci-fi, and it's already evident that we're going to see exploration and progress pitted against timeless human nature. Moreci, Malhotra, & Co. bring us a finely-crafted first issue that piques interest in the rest of the series. 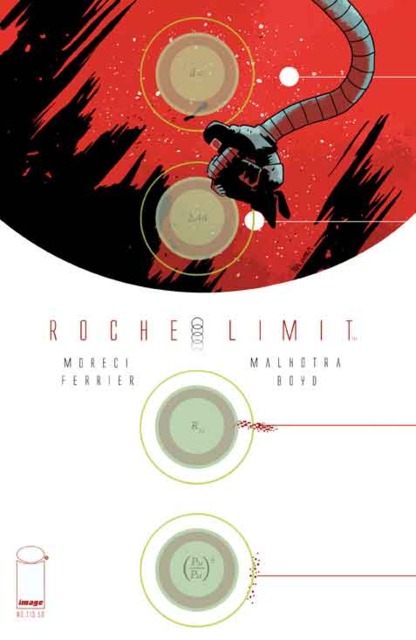