OCP wants to enforce gun control in Old Detroit. The dangerous city's community isn't cool with this and the villain plans to take advantage of the tense situation.

BOOM! Studios' first chapter of ROBOCOP really won me over. As a big fan of Paul Verhoeven's 1987 movie, I was thrilled to see the creative team (Joshua Williamson, Carlos Magno, Marissa Louise) was able to duplicate the classic tone so well. Thankfully, it wasn't just a lucky debut and this second chapter once again feels like a true follow-up to RoboCop.

Williamson's opening chapter was packed with exciting action, but it only briefly touched on the villain and premise. This second issue gives him the chance to really flesh these elements out and still successfully juggles a slight focus on Alex Murphy, a.k.a. RoboCop, and his partner, Anne Lewis. What's interesting is the two leads feel secondary in this one and no, that isn't a bad thing. If you're a pre-existing fan, then you already have a good handle on these two characters, so the lack of insight isn't an issue and the basics are covered to help new readers. This allows Williamson to show why the latest big bad's a legitimate threat for RoboCop and the writer does a thoroughly awesome job introducing the guy's enforcers. It's just enough to get us interested in what this guy will do next and the focus on the villain's side of things doesn't hinder the pacing at all. We're still treated to a slight focus on the two leads and Williamson even managed to toss in a little bit of fun action with Murphy.

Artist Magno and colorist Louise generate pages that feel like a perfect compliment to this dirty world and the ugly, tense and violent tone Williamson is establishing. There's one moment where you can properly feel the rage building in a man's eyes (the bar scene) and the emphasis on grays and darker shades feel right at home in Old Detroit. And, of course, they do a terrific job handling RoboCop. There's a bit or two where he's in motion which feel a tad awkward, but everything else does great work capturing the character's iconic look and cold expressions. It's worth adding that Goni Montes' cover is excellent, too. It's a nice representation of how this villain is aiming to mess with RoboCop's head and push him around before unleashing his big plan.

Much of the artwork fits this tone incredibly well, but there were a few bits of character work that were jarring. For example, a man's head appears a little too large in the double-page spread and a few expressions came off a tad stiff. Additionally, there's one point where a man grabs someone by the groin and throws him. However, it looks his his hand is phasing through the guy's pants.

Minor gripe: did Walter Hutch cross the police line during that tense protest and no one seemed to care or try to stop him?

Personal gripe (doesn't impact the score): as a resident of the United States, the narrative is obviously a very topical one. Now, the last thing I want is to begin a debate on a gun control (for the love of all that is holy, let's try to avoid that in the comments, yeah?), but it would be nice to see more arguments presented for both sides. As of right now, it seems like everyone is making points why people should hold onto their firearms and why people strongly disagree with the OCP's new law. No one is making a solid point as to why this law is okay -- it's just kind of "this is the new law because... well, this city is dangerous, so give us your guns!" Even if the writer's strongly against gun control, it would be nice to see both sides receiving a fair representation. Hopefully that'll be fleshed out in the upcoming chapters.

If you want a true dose of RoboCop goodness, BOOM! Studios' new volume is what you need to check out. This second issue offers a commendable dose of buildup as we get a better look at the villain's plans and still chime in on our two leads. The visuals continue to feel like a perfect fit for this bleak city and, as expected, there's some exhilarating action thrown in the mix, too. All in all, I can't recommend this enough to fans of the first RoboCop movie. It feels like an organic continuation of the classic movie and is swiftly establishing a premise that has a lot of potential to give us a better look at RoboCop's limits. 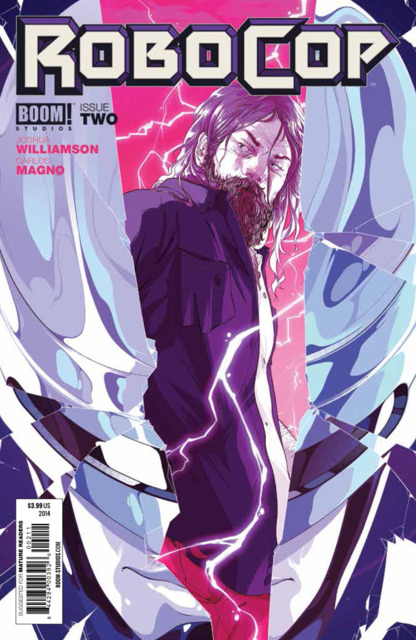