Things a woman draws are coming to life while she searches for her sister in Glasgow.

Vertigo's newest offering puts readers in Glasgow where Isla Macintosh searches for her sister who went missing a year before she was born. She has the ability to make things she draws come to life, but she keeps going back to drawing this one man, in chains. She meets a man named Alec who shows her around Glasgow. From there, weird things reveal themselves.

There was a lot more going on in RED THORN than I imagined. From the interview we did with David Baillie and Meghan Hetrick, the book didn't seem to be as complex as the first issue actually is, which is a pretty refreshing surprise. The book does dump a lot of information on the reader in the first issue, but it never feels like an "information dump." It plays out smoothly and is all necessary information to get this story moving. RED THORN #1 doesn't answer all the questions though. It gives the reader just enough story to get them hooked in for the second issue.

The dialogue is utterly fantastic in this first issue. Both Isla and Alec have distinct voices and the real driving force is the inner-monologue from Isla, which is very smooth and gives so much more insight into her character than her actions do. The flashbacks contained with the story help catch us up about who she is and why she doesn't draw people anymore.

The reader really is thrust right into the story. We know as much as Isla does about her missing sister. We're not ahead of her in terms of solving this new mystery. There isn't a page wasted in this book. Everything serves a purpose.

The art team of Meghan Hetrick and colorist Steve Oliff does a great job at presenting the visual side of the story. At times, Oliff's colors pop a bit too much for the tone of the story, but his shading work is top notch and overall, his color choices are very nice. I really enjoyed Hetrick's work on her section of BODIES, so I was excited to see her on this series since she had this cool, distinct style that pulls from many different types of art. She really shines here while putting together one of the mythological creatures we see. The overall design is captivating, even though it feels simplistic. I'm excited to see what she brings to the table next.

This was a pretty great start for RED THORN. The issue delivers a lot of this world and story all within this opening. We get a good idea of who Isla is and this book actually mixes a bit of romance with a bit of horror pretty well. There may not be any big horror scenes, but the tone for horror is there. The art is pretty fantastic and once again, Vertigo has another hit on their hands. 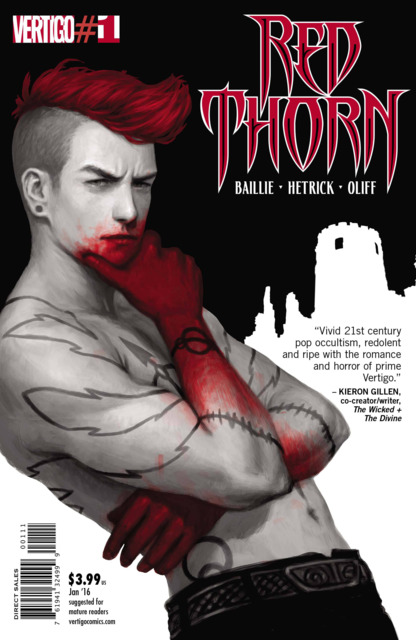