The civil war splitting the Red Lanterns comes to Earth. The battle lines are drawn and the first shots are fired.

This is the first annual in the RED LANTERNS’ run, which I think speaks very well for the direction the series has headed in the last dozen or so issues. Charles Soule’s characterizations of the previously directionless, borderline-cyphers that the Reds previously were is one of the most refreshing, best case scenario changes that a comic can undergo. This issue doesn’t bring an end to the conflict introduced when Guy Gardner joined the Red Lantern, but it definitely brings the storyline to a head in dramatic fashion. The longform style of an annual works to spotlight a ton of characters, some of whom have direct connections to the book as well as newcomers. Gardner still takes center-stage and is written perfectly, still making it up as he goes, still driven and determined and still not losing his sense of humor, despite how badly things go. Zox also gets to shine wonderfully in one of the most emotionally resonant moments, tinged with JUST enough humor, yet seen in the series.

Series cover artist contributor Miguel Sepulveda brings his linework to interiors and, for the most part, his visual designs are everything the book needs. Sharp, clear and kinetic are the three words that come to mind, and three words that typify the tone of the series thus far. When his pages work, they work incredibly well with an extraordinary level of detail, particularly where mass destruction and battle are concerned. Another highlight is the reveal of Atrocitus and his new Lanterns in a two-page spread (with some panels underlined). Seeing these new horrors in such detail sends shivers down the spine. Chris Sotomayor handles colors and handles them extremely well. I’ve mentioned before that DC has a great habit of choosing exactly the right colorists for the LANTERN books and this issue is no exception. It’s a bit grittier than previous issues, but it matches the subject matter to a tee and lends breath to the images.

When Atrocitus’ new rings went out they found Kara Zor-El and the Judge, both of whose stories we got to see. There was certainly the promise that these newly minted Lanterns, and the ones the other rings found, would be the new foci of this title: Atrocitus and Gardner scrambling to find, and recruit, the new Reds to their cause. Unfortunately it looks like Atrocitus simply found all the rest and recruited them off-panel, giving us a new series of Lanterns that, while amazing to look at, have no connection to the reader nor the title at large. We also see massive damage inflicted upon Earth, at the level of a large crossover event. Major cities are attacked, major landmarks obliterated, Atrocitus comments on the massive death toll and...it all rings hollow at this point. Obviously destruction is becoming more and more par for the course for superhero stories, but this is incredibly sudden and seemingly far-reaching with little-to-no acknowledgement paid to the human toll in this or any other title. Of course Atrocitus and his forces wouldn’t care, but Gardner seems barely phased by any of it either.

The art falls into about a 50/50 quality standard. The parts that work are gorgeous, the parts that don’t are flat and dull. Character facial qualities also change a great deal, in one panel Supergirl looks like her usual youthful, vibrant self but in the next few she becomes increasingly oddly proportioned until she winds up looking almost ape-ish.

I liked this issue overall but I was also disappointed that the potential Red stories were cast aside in favor of a quick pay-off. I think the longform style of the issue actually benefits it and allows the pace and drama to develop organically, but there’s so much that feels like it was skimmed over. My feelings on this series are well-known, but the problem with setting a high bar is the continuous need to clear it and in this way the issue falters. I’m still looking forward to seeing where the finale goes and I’d still recommend any fans pick this issue up as it does a good job of continuing the storyline. 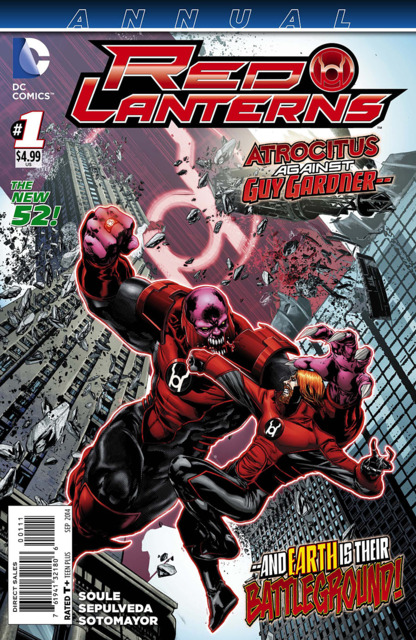