The Saga of the Five Star Mustache comes to its toughest challenge yet: teenaged angst.

Kara Zor-El and Guy Gardner have had one heckuva time adjusting to life in the New 52. Supergirl’s gone through a veritable gauntlet of creative teams and cross-overs while Guy’s been booted off the book he was the original center of and had the team he was on summarily disbanded. It seems both have found an amazing port in the storm under the banner of the Red Lanterns, which has become something of a gathering place for misfits with nowhere else to go. Kara’s rage may have been out of left field, but now that she’s sporting the red and black uniform, she’s getting a chance to expound so much more on precisely what has been fueling her anger and, thanks to Charles Soule’s balancing act of humor and pathos, it’s incredibly resonant stuff. We also get to see Guy and Superman cross paths and it’s one of my favorite interactions for either character. Superman seems to legitimately have no way to approach the situation while Guy Gardner actually references the JLI as “where you might have heard of me from.” I don’t know why, but I burst out laughing while reading this. Skallox and Zox are mugging in the background of almost every panel, and open the book with a perfect segment to let you know what the general tone will be, and the whole issue ends with the return of Bleez in an amazing cliffhanger.

Alessandro Vitti returns on linework and, as always, his characters and action look absolutely stellar. The blocking of every scene, and we’re dealing with a ton of incredibly speedy characters in this issue, gives a great impression of movement and every character’s body language is consistent and easy-to-read and adds a ton to the conversations as well as the action. I’ll never get over Vitti’s ability to allow a being with a completely locked face (Skallox) be so expressive. Gabe Eltaeb’s colors do plenty of lifting in that department as well, blasting the walls down with the bombastic tone of every setting from Ysmault to Earth and back again. There’s an incredible richness to every panel that makes you remember why this book is suddenly on a massive upward tick.

I feel like we're at the end of the "raging Kryptonian" story being still interesting or impactful for a long, long time. Or it's going to need a complete overhaul.

Even though the “raging Kryptonian is well-worn territory by this point, and this book doesn’t have a terribly fresh take on it, it at least feels EARNED here. Kara’s rage does exactly what I wish it’d been doing in her own title: comes out in bursts that she tries to control, but ultimately fails. And when she rages this time, there’s little anyone can do to calm her, so it’s interesting to see everyone just sort of stand aside and let her vent. I think Superman’s points are well taken, I think she’s very justified in both her actions and her emotions and, most of all, I think the rest of the Reds are hilarious without being reduced to comedic relief. This book has it all and uses it to great effect. 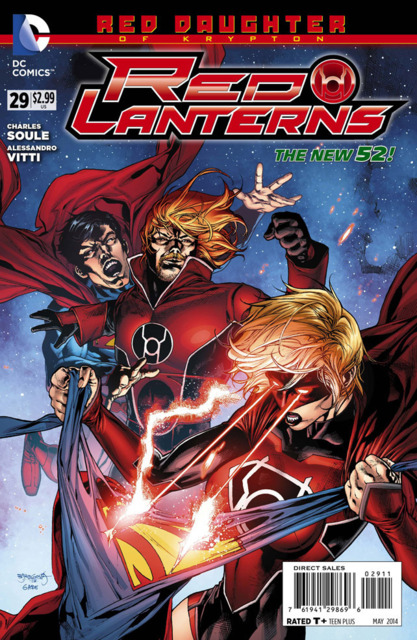