Doc Green and Steve Rogers go on an adventure!

PLANET HULK captures the fun and awe of 80s adventure films and jam packs it with familiarity via Marvel characters in a not-so familiar setting: Battleworld. In the second issue, Steven Rogers and Devil meet Doc Green and are on the way to the Mud Kingdom to take down the Red King, even though Rogers is much more interested in finding Bucky.

In addition, we learn a little bit about Rogers' past with Bucky and it's not what the traditional 616 fans are used to. Rogers wasn't the first Super Soldier. It seems Sam Wilson was and while Rogers and Bucky were escaping the bombings in the Forgotten Kingdom, they saw a sign to enroll in the super soldier program. The flashback breaks up the issue and gives the reader a nice look into the relationship between Steven and Bucky, which makes Steven's search for Bucky a bit more meaningful.

Sam Humphries does a fine job with the dialogue in this issue. Doc Green has such a distinctive voice and his personality really shines through his dialogue, even though he doesn't always have the most "shiny" personality. His dialogue is almost comical, at times, with just the was he says things. I loved the moment where Doc Green called Devil his "Steed." I cannot tell you why, but it was comical to see someone who looks like the Hulk, dressed in post-apocalyptic gear, talks like he's from the Middle Ages.

Finally, Marc Laming and Jordan Boyd work wonders with the art here. It's clean, vibrant, exciting, and full of amazing detail. I loved what Boyd did with the colors during the flashback scene, by pulling back a little and giving the colors a duller look, really conveying a sense of the past.

The biggest problem with the issue is that it moves a bit slow here. Not too much happens, in the grand scheme of things.

There's a great sense of adventure in PLANET HULK that we don't get to see in a lot of comics, which hearken back to adventure films of the past. There's a lot to love about this issue, including the gorgeous art and the fact this story really stands on its own merits and doesn't rely heavily on what's going on in the main SECRET WARS book. The only downside is that there isn't too much going on in the issue. I have a feeling it's something that will read much better in trade rather than as a stand alone. Overall, I highly recommend this issue. 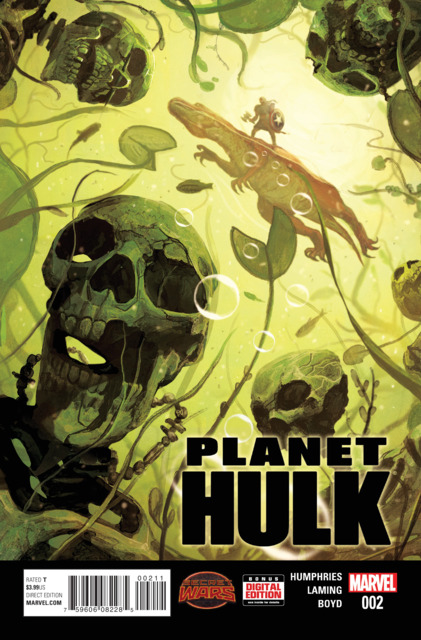