Brian K. Vaughan and Cliff Chiang deliver the goods in this new series.

There are certain creators whose work you’ll follow pretty much regardless of the topic. Brian K. Vaughan has proven himself as a writer time and time again and Cliff Chiang has a fantastic style that immediately presents a special vibe to the story. With PAPER GIRLS, we didn’t know a whole lot about the premise of the series. Dealing with four paper girls in the 80s that find something ‘special,’ there was enough to get my curiosity going.

As the story stars out, you’re immediately pulled back to the 80s. It’s handled in subtle ways and the elements from the time period aren’t presented in a way where you’re knocked over the head in order for the story to drive home the point of when this is taking place. The little references along with background detail like a music poster in a bedroom or pair of headphones being worn are things those that lived in the 80s will immediately recognize. We also get some of the wonderful aspects of having the job delivering newspapers. If you’ve ever been a paperboy or papergirl, you’ll feel the shivers of having to wake up at the crack of dawn to hop on your bike in order to get the daily news out. Other mentions of collecting from the customers is almost enough to make you slam the comic shut. But this book is much more than a telling of the hardships of delivering newspapers.

What Vaughan does with ease is introduce us to four different and unique young girls. Each one has a separate look and personality to them. Within a matter of panels, you feel like you already know what they’re like. The story all seems fairly innocent, with some typical problems or dangers living in a suburban neighborhood in the 80s might bring. But there is that matter of the something “special” the girls find. That’s where the story takes off in a crazy direction. Just when you think you might have an idea what’s happening, you’ll get knocked off your feet with what is revealed on the final page. There seems to be several layers to what’s going on.

Adding to Chiang’s art is Matthew Wilson’s colors. Wilson always does a phenomenal job when working on an issue and this is no exception. Part of what I loved about the art here is the mix in panel layout. Chiang gives some typical panel sequences and then we suddenly get a larger panel that highlights a certain thing or action. Getting a larger view of the scene or characters is a cool thing. As the story starts to unfold, you’ll find yourself looking forward to seeing what’s coming next as well as reading it.

In this day and age, when it comes to comic series, we usually know way too much about what’s going to happen before the issue hits the store shelves. There is something fundamentally delightful in not having any idea where this series will go. Vaughan has made me care about the characters from the beginning. We have a fascinating set up that makes me want to know what’s going to happen next. Chiang’s art is a joy to look at no matter what he’s drawing. This book may not fall into the typical comic book category and that’s a great thing. We need more books that stand apart from each other, even if our wallets complain about having one more title to add to the pull list. PAPER GIRLS is jammed with a special kind of innocence but doesn’t shy away some slightly mature themes. You’ll be hooked from the beginning. The fact that it’s an oversized first issue for only $2.99 will make you feel like it’s your birthday. This is a great start to a new series. I may not know what’s coming up but I know I’m going to love every minute of it. 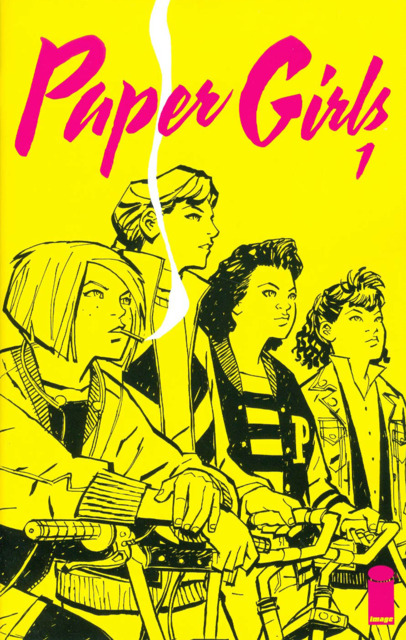