If you thought the end of issue #3 was crazy, wait until you read this issue.

We've reached the halfway point and with each issue, I become more invested in this series. Too many times in past events, there's a lot of excitement in the beginning and then it all starts to go downhill. That is not the case with Jason Aaron's story.

On the surface, we have some great and different team-ups going on. As the players all move to different areas of the board, we're starting to see them all actually come together. For a story centering on the murder/mystery of the Watcher, having other mysteries simply adds some spice to the already interesting story. You have to admit the final page of last issue was a bit of a shocker. As jaded comic book readers, we may have all bee skeptical but there's no denying the powerful image it left us with. Obviously we do get some follow up to that incident but it may not end quite like you might have tried to predict.

Even though this story involves a large portion of the Marvel Universe, it's pretty cool seeing these little secret groups working on trying to get answers, even if they're not fully sure who they're actually working for. As different characters come together, it's almost a little odd seeing them (Gamora and Emma Frost? Punisher and Rocket Raccoon?), but it does work out nicely. This type of cohesion is what we should have in such a rich comic book universe. They may not have worked together before but it's likely they know most of the other players.

As a long time fan of Mike Deodato, I am overjoyed to see his art on this series. He has a knack for being able to draw pretty much everyone and Frank Martin's art makes it all even prettier to look at. Once again, we get a glorious last page that might leave your jaw hanging a little.

There are a couple moments the inking or color makes things a little muddy. It's not a huge problem and I can easily live with it.

Despite how often we have big comic book events and crossovers, it's not every day we have one that keeps you glued to the pages every single issue. While focusing on the big mystery of who killed the Watcher, Jason Aaron is giving us other mysteries that are keeping us in suspense and making our jaws drop. Mike Deodato and Frank Martin are delivering great art and color. The dark feel of the art really adds to the tone of the story. The worst part is now having to wait for the next issue. 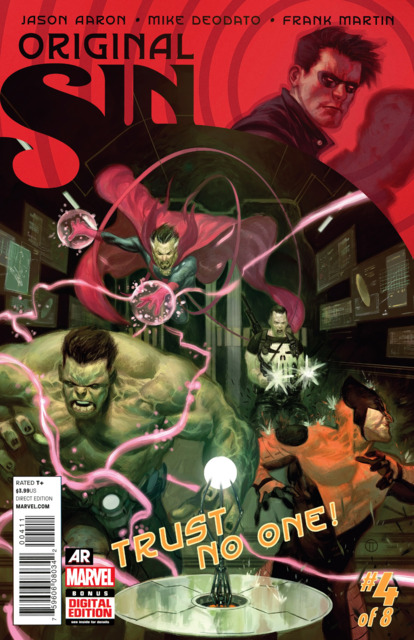