Original Sin #3 - Trust No One, Not Even Yourself

We may have seen who has one of the Watcher's eyes but there's still plenty of secrets to discover.

It’s almost strange getting a little backstory and seeing the beginning of the plotting to go after the Watcher and his secrets. There’s almost an odd, yet exciting, feeling with the way this story is unfolding. We’re in the midst of a big murder mystery. Clearly there is more to it than that. With the standoff that happened at the end of last issue, the secrets of the world have been unleashed. The floodgates are opened and everyone is thrown off guard as they are suddenly slammed with new revelations. And it’s not just the heroes, of course. That adds a more realistic touch to the idea. It's great to briefly see non-superheroes affected by the revelations. But while secrets are being unleashed, we still don’t have them all, including the big one.

Besides the main heroes going after the Watcher’s eye, we still have the other mini-teams formed by an unknown person. The combination of the groupings is interesting and it’s fascinating to see some of them outside their normal elements. The investigation heats up and you’ll never believe the last page.

Mike Deodato continues to do a great job depicting all the characters in the various locations. It’s a heavy load and he seems to do it with ease. I mentioned in previous reviews that there were times things looked a little muddy or unclear but that isn’t the case in this issue. With Frank Martin’s colors, the mood is set nicely. The colors and shading help to create a mysterious vibe in the story with shadows in just the right places. Some of the mysterious characters are shown in plane sight in certain panels but the shadows prevent us from seeing who exactly it is despite them being fully shown.

All the characters being hit by the sudden revelation of secrets is a little of a stretch. While not necessarily everyone will be discovering huge secrets (in their own titles), it seems a little odd and convenient that so many characters have these deep secrets that have been hidden from them. Hopefully not every single main character in the Marvel Universe will have some big crazy secret but not everyone should have a secret that would throw them off.

It could be that too much is happening at the same time but I still find it hard to believe that the big players are apparently unaware that someone has gathered and sent other heroes off on separate missions without their knowing. Is Cap really unaware that Bucky is out in space?

Comic Book events are nothing new these days. But there's something about ORIGINAL SIN that is keeping me captivated. We may be seeing a lot of new secrets come to light with characters in their books but the whole idea of a mystery in the Marvel Universe if just fun to read. Mike Deadato is keeping pace with Jason Aaron's script with ease. The action may be spread all over the place but that's part of the fun. We have strange pairings working for a mysterious boss and seeing these interactions has me hooked. It doesn't hurt when you have a big crazy twist of an ending either. I can't wait to see what happens next. This is the kind of comic book event I want. 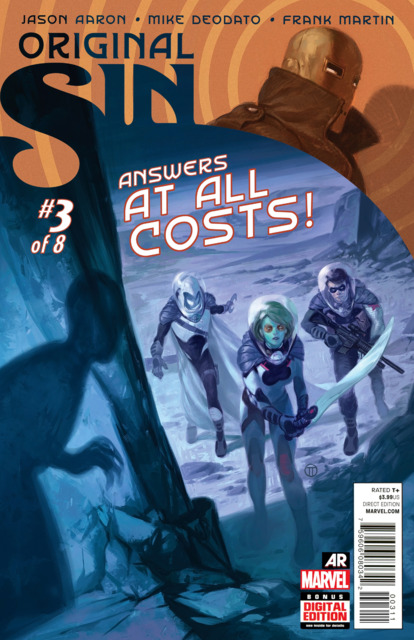