ORIGIN II has become more of a feature of Adam Kubert's art and Frank Martin's colors than anything else. This issue takes a lot of chances and risks in page and panel set-up that, for the most part, works incredibly well. Each page is in unique in its layout, and it really keeps the reader engaged and enthralled with the art. As the issue goes on, and the scenes get more chaotic, so does the page set-up. This is also something I'm really enjoying coming from writer Kieron Gillen. As this book gets crazier, we see a lot more panels packed into a page, which will put you right into the scene. Gillen puts us into the action with more than just the dialogue and pictures, the pages themselves depict the tone of the scene.

As far as the story goes, it's enjoyable if you like watching Wolverine slash and bash his way through people. Aside from that, it doesn't offer much. The action here is intense, dramatic, and frankly, eye candy for those who secretly love the level of violence we've come to expect from a solo Wolverine book. There's two pages in particular which are so simple but work so well. It's two pages which completely put the reader inside of Wolverine's mind and they couldn't be simpler. No spoilers, but when you see it, you'll know.

The problem with ORIGIN II, which really shows here is that is series isn't about much more than Logan's early days with Victor Creed and Nathan Essex. We're given glimpses of moments in his life and how he stopped living in the wilderness, but unlike ORIGIN, which had a very specific point of showing readers where Logan came from, but ORIGIN II feels like it doesn't have direction.

The book is becoming less and less of an interesting read, which is a bit of a shock, since I'm normally a fan of Kieron Gillen's work. It feels like more of the same Wolverine stories we're used to and doesn't live up to the excitement and hype.

There was actually one huge problem with the art here, believe it or not. There's a lot of odd choices in page and panel set-up midway through the issue, and while Kubert takes some fantastic chances, there are a few pages that don't work because of odd character placement in the panels, especially during more intimate moments between Logan and Clara.

If you love Adam Kubert's art and Frank Martin's colors, pick this book up because they take some chances here in page layout and set-up. It's a workshop for artists to take a look at how differently you can set up a page and invoke emotion from the reader. The problem with the issue is that it doesn't do much. It's hard to figure out what direction this is taking and unlike the original ORIGIN, this book is not much more than a moderately fun and violent Wolverine book. 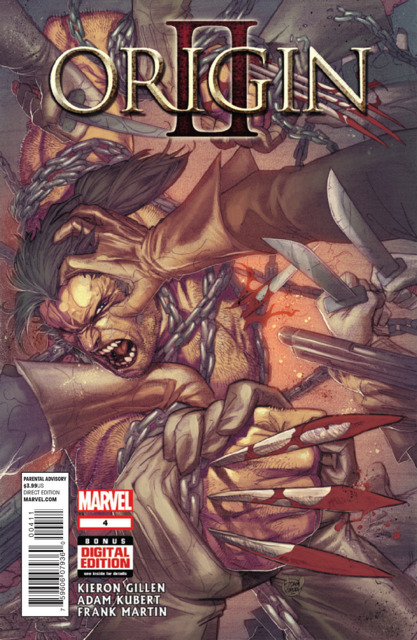