Some of the biggest names in comics band together to create an anthology in support of the Occupy Movement.

Often when there is a movement or cause of some kind we will see comic creators, writers and artists join together on a single project to create something whose proceeds go to that particular cause. This is exactly the case with OCCUPY COMICS, a new anthology which features works from Alan Moore, David Lloyd, Joshua Hale Fialkov, Ben Templesmith and many more. The proceeds for this project will be donated to the Occupy movement and its "related initiatives. The first issue of this new series nine short series which are separated by illustrations from artist like Molly Crabapple and David Lloyd. The theme throughout is generally the same: exploitation of the working masses and rebellion of the people against private and state institutions. The stories within the anthology are different lengths: some consist of four pages of story, others are a single page featuring stories that are more concise and to the point. Different artists and a wide range of creative teams make this an interesting comic to pick up, to be sure, but is it any good?

The idea behind this anthology is great, and many of the biggest names in comics contributed to the creation of this issue. The artists that lent their talents to this issue did a fantastic job, and that really stood out to me as being one of the big highlights of this book. The two-page spread by David Lloyd, for example, is fantastic: his image of V teasing the iconic bronze bull that lives on Wall Street in New York City is fantastic and speaks more than some of the actually stories in this issue.

I found that the sections that were the shortest were also the most meaningful. The illustrations by artists like Crabapple, Lloyd and Spiegleman stood out. The short, one page comic by cartoonist Matt Bors was also fantastic because it was straightforward and humorous: it was a great way to express and comment on the Occupy movement in general without seeming contrived or pretentious. Finally, if you are a big Alan Moore fan and you would love to read one of his stories, you won't find that here, unfortunately. What you will find, however, is a fantastic piece by Moore which is both humorous and informative.

Some of the stories are great, well written and interesting, but the problem is that they all generally act as overviews of the movement and very few of them actually allow readers to establish a personal connection with their characters. It all seems very much as though it grazes the surface of these issues and fails to really delve into them respectively.

Sections of the comic, like "Casino Nation," for example, seem rather pointless. There is no story in this section, just information. And while it is informative to an extent, it is also information written by two individuals who don't provide a works cited page explaining where they obtained all of their information. Based on the text below the header there should be a bibliography on OccupyComics.com but it seems to be either missing from the site or very difficult to find. However, that's sort of besides the point. The sources should have been printed within the book.

All in all, if you feel that the proceeds of this anthology go toward a good cause then you will easily be able to justify spending the money on this comic. The book consists of 48 pages and features some of the industry's biggest names, but that doesn't mean it's all that good. There are some parts of this comic that are great: the editorial by Alan Moore and the comic by Matt Bors being two great examples. Yet as a whole there are some definite moments that are not as enjoyable, some of which I mentioned above. 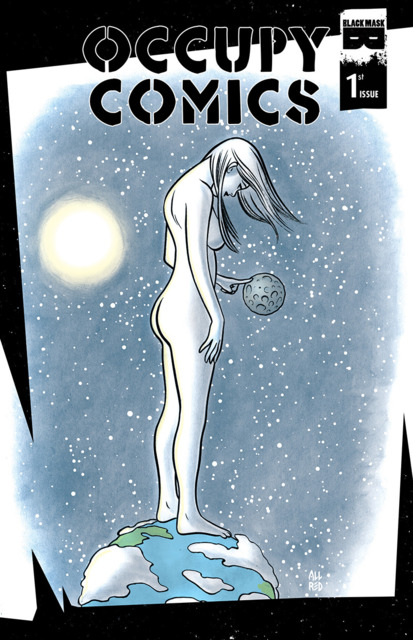