The vagaries of the past take on new meaning in the present -- for Simon and for us.

Science is the new rock 'n roll. Science comics are the new indie jams. Yet NOWHERE MEN (aptly, the originator of the "rock 'n roll" line) stands out even amidst the recent uptick in science-themed sequential offerings, largely due to a precise -- dare I say scientific -- attention to detail. This is a world exquisitely built, and meant to be savored. Carefully-composed details like "ESQ" and "The Science Chronicle" articles -- fully composed pieces with personality and depth -- and system-failure screens with internet kittens and the like populate these pages, collectively bringing more than many in the sequential business. Bells and whistles aside, the sequential stuff is top notch -- impeccable colors, seamlessly-integrated letters and graphics, perfectly stylized line art, and an exciting narrative. Bellaire, Fonographiks, Bellegarde, and Stephenson are good.

Detail isn't NOWHERE MEN's only strength -- this ending to the first arc is heavy on confrontation, which corresponds to high drama, delivered via scathing lines from World Corp's scientific elite. Angry genius banter might just be more entertaining than reality tv. (Dade and Simon hurl particularly excellent barbs at each other.)

This issue is a shining example of how to end an arc -- especially one that juggles so many characters and storylines. Everyone converges, everything that was simmering for the first five issues suddenly passes "boil" and goes for "explosion," and there's a simultaneous sense of closure (for some things) and anticipation for what's next (for the parts that are meant to be suspenseful; it's an ongoing, after all).

While this issue was marvelous, I worry that the slow burn leading up to it made NOWHERE MEN a difficult title to keep on some pull lists, and lapsed readers will miss out on the endgame of this arc. I rarely advocate grabbing trades in lieu of single issues, but reading the first arc in a single dose may make the pacing more palatable.

Celebrity, secrecy, underhanded acts of self-interest -- and science. Now is an excellent time to jump on board with NOWHERE MEN (or re-join and catch up, if you've dropped), as Issue #6 wraps the first collected volume. Series fans will have to wait a bit for the next installment, slated for a January release, but can pick up the TPB in just over a month. And, after all, it's only the end of the beginning of the beginning… 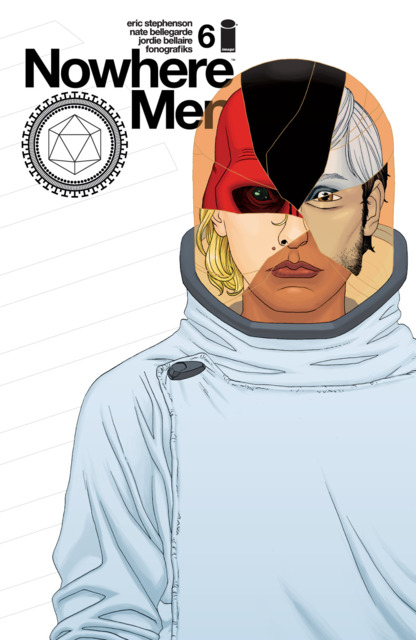