Even though there is a bit of history involved with Sam Alexander learning about a special branch of the Nova Corps and the appearances by Gamora and Rocket Raccoon, the series still has a fresh feel making it easy for new readers to jump in. Because this world is new to Sam, for the most part, we get to see everything unfold through his eyes. We may know about the previous members of the Nova Corps but you can easily dive into this series without having to worry about what you might have missed.

The combination of Jeph Loeb's writing and Ed McGuinness' art with Marte Gracia's colors gives the series such a warm and friendly feeling. Sam may be facing incredible and deadly odds, but you still feel the enthusiasm coming from Sam as if he was a kid with a brand new toy.

It's great seeing McGuinness' take on Nova in action. The effects of his blasts are different from the previous version and the 'threat' he faces off against here looks nice.

Just when you think you know where the story is going to go, Loeb throws a couple twists at us. The issue has such a fun feel to it. I keep saying that this could be an all-ages book or at least doesn't necessarily have to be a T+ book. It's got big action with great visuals and a big sense of adventure.

The Chitauri. We haven't seen them in the Marvel-616 universe. Their appearance here almost feels like a way to bring in elements from the Cinematic Universe. It doesn't really have a forced feeling but seems a little odd to be randomly brought in now since this book appears to have a connection to GUARDIANS OF THE GALAXY, which, obviously, is getting a movie next year.

The main problem with this issue is it feels it just flies by. A lot happens in a very brief amount of time. Sam Alexander had a tiny bit of training but still is out of his element with the new world he's been thrown into. Whether he's going by a huge amount of luck or has a natural tie to the powers, he easily gets out of a very sticky situation (although he does get into another one soon enough).

NOVA continues to be a fun and enjoyable title. Jeph Loeb and Ed McGuinness are making Sam Alexander into a great character. So many of today's comics have such dark tones and themes, it's refreshing to have a comic with a lighter feel. There are still some slightly mature themes entrenched here but the enthusiasm and design of Sam makes you feel a little warm inside. Sam is a character I want to see more of in the Marvel Universe. I just hope anyone that may work on the character uses the same care and understanding that Loeb and McGuinness currently are. The book has a big epic feel. The only problem is the story feels like it rushes by with too much happening too quickly. This just means we need more NOVA. 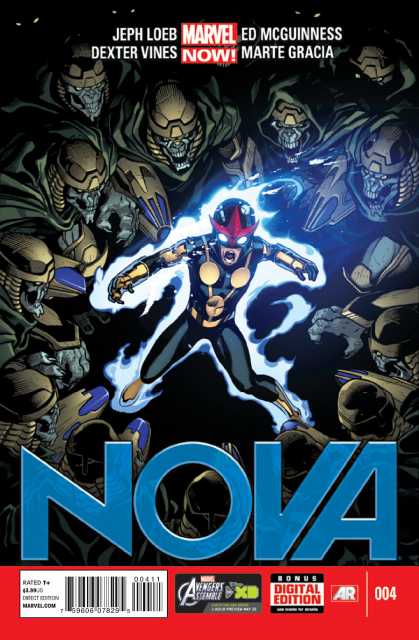