The story of the new Nova continues and you won't be able to resist liking this character.

It's no secret I was a big fan of the previous Nova, Richard Rider. Also, anyone that has watched the animated Ultimate Spider-Man series with Sam Alexander knows he's not the most likable character. None of that matters when it comes to this series. Jeph Loeb and Ed McGuinness continue the story of how Sam Alexander became Nova and how he deals with it all. Too often the gaining of powers is glossed over. We see new characters immediately become experts in using them. It's great seeing his reaction to something like flying to the moon.

As a 'new' and young character, careful attention has to be made in getting any reader hooked. Seeing how this kid handles his newfound powers is fun and entertaining. Loeb is adding a new layer to the concept of the Nova Corps and seeing it unfold grabs your attention even further. The addition of Gamora and Rocket Raccoon connects Sam's world to a bigger one and sets the stage for a bigger role in the Marvel Universe.

Instead of just focusing on Sam as Nova and possibly galactic threats, we still get reminded that Sam is a kid, living at home. The interaction between him and his mom keeps him grounded and adds a welcome sense of realism to this character we're getting to know.

Visually this book has such an appealing look. McGuinness' art is highly complemented by Dexter Vines' inks and Marte Gracia's colors. We know this team won't last forever but we can enjoy it while it lasts.

At some points it's hard to figure out what Sam's role in the Marvel Universe will be. He is young and inexperienced but it appears he's about to be thrown into a highly volatile situation. While Sam and his sense of awe in his new role has a sense of charm, there will need to be a balance between the humor and how he deals with the dangers. It could be humorous seeing him accidentally defeating a horde of enemies but as a 'Nova,' we also want to see him kick ass with his powers.

It also feels like we're waiting to see what Gamora and Rocket Raccoon will be doing in this title. They've had some conversations with Sam about why he now has the power but it feels like they should just get to the point instead of just sitting back and slowly guiding Sam along.

The mention of the threat Sam will soon be facing seems like an odd choice for a comic in the Marvel Universe. In some ways it feels a little forced.

NOVA continues to be a joy to read. We could definitely use more titles that are this fun to read with a good sense of light-heartedness. Jeph Loeb is making Sam Alexander a fun character and you can't help but want to see more of him. We're starting to see how he will relate to the rest of the Marvel Universe. It's not fully clear if this book will focus on the humor angle or if we'll see Sam take on his responsibilities in a more series fashion. The art team of McGuinness, Vines and Gracia make this a visual treat. It would be nice to see Gamora and Rocket Racoon do more but with the visuals we have, you can't really complain. Nova is on the verge of a turning point in this issue. This issue and the next will give us a good idea what sort of hero he will be. 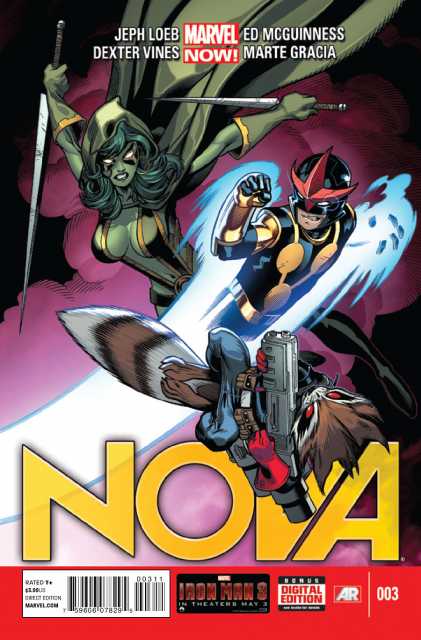