Nova and Rocket Raccoon team up to find out what happened to Sam's father.

After Sam's revelation that his father killed another member of the Nova Corps, Same heads to space and teams up with Rocket Raccoon to find Adomox and the answers he seeks. He eventually gets those answers, but it puts his father in a new light. Jesse Alexander may not have been the hero Sam thought he was. He may have been corrupt and a murderer.

This Marvel team-up adventure is actually a ton of fun. When I first saw Rocket Raccoon in this issue, my thoughts were "great, another book Rocket Raccoon is popping up in for no reason." I was wrong to think that because this team up works so well. Sam is young and relatively innocent and Rocket is pretty much the exact opposite. He becomes the comic relief and the bad ass all in the same issue.

Writer Gerry Duggan makes this book fun and on top of that, I love how he writes Rocket Raccoon. He's funny, sarcastic, and comes off like a trucker, in a weird way. The book has always been fun, but throwing Rocket Raccoon into the mix really raises the bat and he's actually the best part of this issue.

On top of that, the artistic team of David Baldeon (pencils), Terry Pallot (inks), and David Curiel (colors) do a bang up job on the issue as a whole. The art style and colors match the tone of the book extremely well, and Baldeon fits an insane amount of detail into some of these smaller panels throughout the issue. It's pretty awesome. This book is just as fun to look at as it is to read which is a huge success.

Although the reader is given the answers in this issue, there's still a feeling of being unsatisfied by the end of the issue. There was some hope to get to see Sam's father, but it doesn't happen here. Also, there's this skeptical feeling I get when Adomox tell's Sam about his father like he can't be trusted because he's one of those bad guys.

NOVA is a series I'd never thought I'd be a monthly reader of. The concept never really appealed to me and even moreso, tie-in issues to big events tend to also fall flat. However, NOVA #19 does a really solid job of giving readers a fun story that ties into the main event, but it doesn't take away from the main storyline. Duggan is consistently putting out a fantastic book that is a ton of fun and I highly recommend this series. 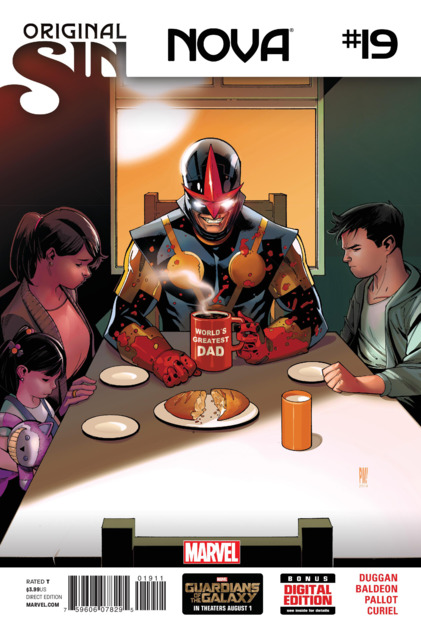