NONA is a pretty darn awesome book that captures all the emotions of being a kid, with a bit of a comedic twist. This issue, however, isn't a funny one. Sure, there's a few pretty funny moments in the opening, but this issue really revolves around two things: the death of Uatu and Uatu's eye showing Sam his father's secrets.

Gerry Duggan knows how to make a reader comfortable within a story. He starts off presenting the reader with a family moment to honor other members of the Nova Corps. It's a cool, touching moment and the fact the Alexander family unit is such a large part of this book is what makes it such an engrossing read.

We get to see the events of ORIGINAL SIN through the eyes of Sam. Everything here is from his perspective and the reader gets a little bit more insight into how Sam felt during the first battle with The Orb through the narration. It's done well and progresses the story nicely.

The big moment of NOVA #18 pays off extremely well through the narration of Sam as well as the art from David Baldeon on pencils, Terry Pallot on inks, and David Curiel on colors. The look on Sam's face when he sees Uatu is haunting. Sam has a look on his face of pure horror as a person he felt connected to ceases to exist. The art, throughout the rest of the book, is incredibly captivating and beautiful. It perfectly fits the tone and writing of the book.

NOVA #18 is actually the perfect place to jump onto this series, as long as you've read ORIGINAL SIN #0. Reading that book solidifies the relationship Sam and Uatu had in the past and gives this issue a lot more of an impact. Aside from that, this book does a fine job at catching up new readers, introducing them to the supporting cast, and getting them up to speed. Although, it is recommended to read the rest of this volume because it's been a blast so far.

NOVA fans will really be interested in this issue because it reveals a little bit more info about Sam's father, the previous Nova. Without giving anything away, it's a pretty chilling scene and this is going to have some major effects on Sam in upcoming issues. On top of that, there's a fantastic dialogue between Iron Man and Sam afterwards.

The problem with NOVA #18 is that if you're reading ORIGINAL SIN, a lot of this is recap. While it is from Sam's perspective, there's around 10 pages that recap a story folks have already read in earlier issues of the main event book. It's overall well done, but just redundant.

NOVA #18, on its own, is a solid issue that gives more insight into how Sam felt about the death of his friend, Uatu. However, it's not a must have tie-in to ORIGINAL SIN, unless you're already a NOVA reader. If you are interested in this character, this is a fine place to jump on though. Duggan really makes this an issue that is not only new reader friendly, but completely captivating. While it does just revisit events that have already happened, it's still a great read with some incredibly beautiful art work. Overall, I highly recommend this issue. 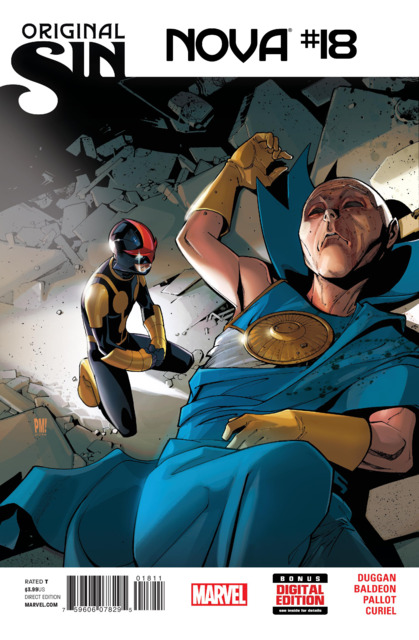