Nova and Beta Ray Bill travel to the enigmatic Knowhere to track the vicious Skaarn. And one of Marvelâ€™s greatest characters make his shocking return!

COSMO! COSMOâ€™S BACK! And heâ€™s being written by Gerry Duggan! If you donâ€™t know who that is, Iâ€™ll keep it a secret because the book operates under the assumption that you donâ€™t know (and based on the characterâ€™s popularity, or lack thereof, itâ€™s not a bad assumption), but itâ€™s great to see him return to the pages of comics. Apart from that, we finally see our heroes track Skaarn to a place where heâ€™s decided to sit still for a moment and barter his way into possession of a massive War Bringer. Unfortunately for its owner, Skaarnâ€™s bargaining looks an awful lot like Han Soloâ€™s in his Mos Eisley days and, naturally, it falls to Nova to fight the giant, space robot. Bill, meanwhile, is attempting to track down the violent killer, but his temper gets the better of him and Knowhere gets a few new exits. Duggan has a great command over each characterâ€™s unique voice, itâ€™s something Iâ€™ve been a big fan of since he took over the book, and that continues here. I may be SLIGHTLY biased as it seems heâ€™s writing this book specific for ME, which I appreciate, though Iâ€™m unsure of to the sustainability of it. Between Cosmo and Beta Ray Bill, all he needs is to throw in Darkhawk and itâ€™ll be a hat trick.

Pencils are by newcomer David Baldeon and heâ€™s got some mighty big shoes to fill after Paco Medinaâ€™s amazing run, but he seems to be up to the challenge. Thereâ€™s a lot more fluidity both in the pace and character designs of his panels, creating a much more kinetic experience than Medinaâ€™s more bombastic visuals. Terry Pallotâ€™s inks do a good job of making sure things donâ€™t lose their way or become unclear, and the action remains, generally, well-paced and clear. Which is impressive considering the scale of the battle that goes on in this issue. Finally weâ€™ve got Chris Sotomayor on colors and he goes for something quite different than what weâ€™ve seen previously. I like his color palette on the various vessels and locations of this title, it gives them a sense of bright wonderment that is often absent from a lot of sci-fi tales.

Iâ€™m not sure as to the exact inner workings of a War Bringer, but youâ€™d think something as powerful and dangerous as this thing purports to be would have some kind of lock. Skaarn shoots this thingâ€™s owner and is immediately able to issue verbal commands to it. Setting aside why someone would deal with Skaarn with his only assurance being a giant machine that offers ZERO protection from a distance, the idea that there wouldnâ€™t be any kind of key or password on such a powerful weapon feels like the story is being herded to its conclusion rather than arriving there organically.

As much as I enjoy Sotomayorâ€™s colors in certain panels, there are others that run afoul of a common problem in books that take place in space: theyâ€™re not very clean nor clear. Thereâ€™s a muddy look that especially pervades characters and makes their color palettes look plain, something that really needs to be avoided. Itâ€™s not an issue-wide problem, but when it comes up, it comes up very, very visibly.

Nova continues to be a visually interesting book, hangups aside. Itâ€™s returning to a place I havenâ€™t seen referenced since the LAST Nova issues, itâ€™s using Marvelâ€™s deep and wide cast of bizarre characters to their fullest extent and, most of all, it is a TON of fun to read. Sam Alexander is becoming more likeable with every issue and seeing him take on the mantle of Nova is one of Marvelâ€™s best cosmic stories and still getting better. 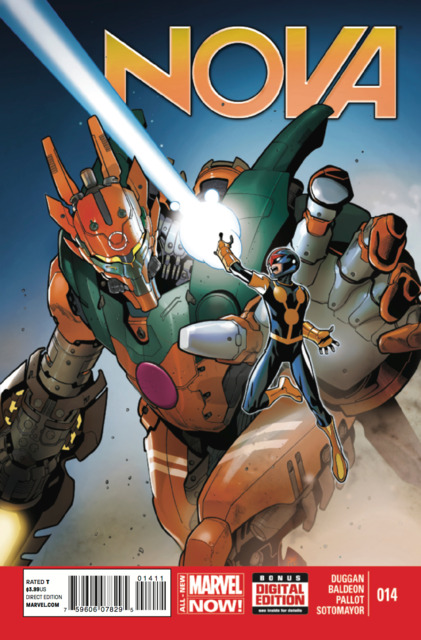