Sam Alexander used to be the last Nova around. That is no longer the case.

Sam Alexander has had it tough. In the comic world, he struggled with the loss of his father, the responsibilities of becoming the last member of the Nova Corps, and trying to get through school when not being a superhero. Sam has also struggled to win over the hearts of readers that longed for the return of Richard Rider. As a fan of Rider, it was understandable to want the deceased character to somehow return from the dead. With writers such as Jeph Loeb, Zeb Wells, and Gerry Duggan, Sam has earned his place in the Marvel Universe.

Sam is no longer alone. Richard Rider is back. It's not clear why or how. What is clear is there will be some possible repercussions to his return. What readers can rejoice in is we now have two Novas to enjoy. Jeff Loveness and Ramon Perez take on the task of delivering the stories of the two Novas. While we can assume these two will inevitably meet up, this first issue does a nice job of balancing the separate stories. We see Sam continuing his Nova duties while attempting to make it to school on time. Richard has to adjust to being back and figuring out what has happened since he died. We also get hints that his resurrection could involve a price.

Perez's art with Ian Herring's colors sets the right tone. We often see books with younger characters appearing to be miniature adults. Perez makes the kids look like kids. There's also a nice contrast in color when the action is in space compared to the scenes with Rider visiting his mom and Sam at school.

Besides having two great Novas in one book, there's a sense of the unknown here. I wasn't sure how much of a focus each character would receive. Each character has their own issues and concerns to deal with. The idea of the two meeting is an intriguing one.

With this being a first issue, there has to be some set up for new readers, along with the return of Rider. Because of this, the focus shies away from the action a bit. Sam's encounter with a new student is fun to see but feels like it takes away from the major beats of the series. There's only so many pages for each issue. It gives more insight into who Sam is, but we're eager to see a meeting of the Novas as well as finding out what Rider is going through.

What could be better than a comic series with Nova? How about a comic series with two Novas? New and old fans can rejoice as the adventures of Sam Alexander continue along side the return another character. Jeff Loveness and Ramon Perez are giving the two characters clear and distinct voices. The art and color creates a good atmosphere and tone for the characters. With the questions raised here, there's definitely plenty of reasons to come back for more. 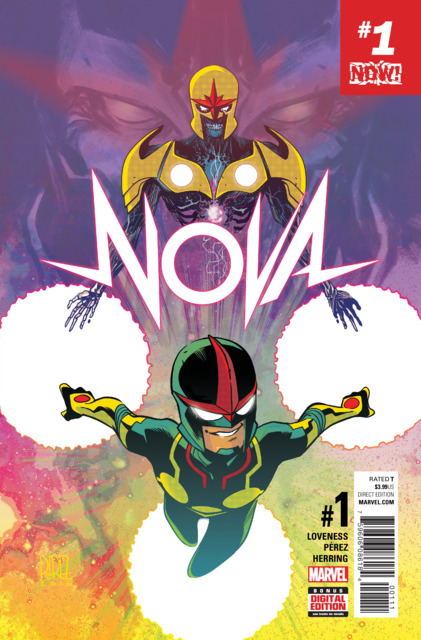