Night of the Living Deadpool #4

Can Deadpool cure the zombie apocalypse and set things right? Or can he find a way to actually make things worse?

Deadpool's walked a long and bloody road in the zombie apocalypse, and with this chapter, writer Cullen Bunn finally brings his adventure to an end. Does Deadpool walk off into the sunset after curing the infection? Does he turn into a zombie or is destined to walk the Earth alone? Let's just say I had quite a few potential outcomes in mind before going into this book, and thankfully, Bunn surprised me and delivered an ending that I most definitely did not expect. To elaborate would potentially spoil it, so let's play it safe and jump into some of the book's other qualities.

First and foremost, artist Ramon Rosanas is without question the perfect person to create this series' visuals. No matter what tone Bunn throws his way, Rosanas is able to deliver and then some. The gore? Cringeworthy and disturbingly detailed. The laughs? Brought to life delightfully and there's a brilliant use of lighting that captures Deadpool popping a smile. Odds are it'll make you smile, too. The shuffling undead and locations? All full of life (so to speak...) and completely immersive. Not a single scene looks rushed and the entire limited series does phenomenal work delivering on each atmosphere and scene Bunn has in the script.

As for the script itself, the writer does a solid job juggling the tonal shifts in this finale. It'll make you burst into laughter; it'll drop your jaw with its zombie slaying; and it's very possible it'll even spook you a bit as Deadpool creeps around dim hallways with his very... well, let's just say "unique" flashlight. Each chapter has mostly focused on a singular tone, but this last one brings it all front and center and feels like a very satisfying conclusion. If you've been enjoying the limited series so far, you're going to love this one.

I had a real blast with this chapter. I could nitpick a bit, but the positives vastly outweigh the cons and the cons are so small that they're honestly not even worth mentioning.

Deadpool and zombies, what's not to love? Cullen Bunn managed to take the best elements from both of their worlds and mesh them together. The limited series is loaded with humor yet also avoids making Deadpool a walking and talking punch line. It's not all fun and games with the Merc with a Mouth in this one and it's great to see him receive a little more emotion. Then there's all of the gore, horror and depressing elements you'd find in any standard zombie apocalypse. Ramon Rosanas then masterfully brings this all to life and, simply put, the end result is something any zombie or Deadpool fan needs to experience. I wasn't sure what to expect with this final chapter -- especially since we've seen the book undergo such drastic changes in tone -- but I've got to say, this finale did not disappoint one bit. 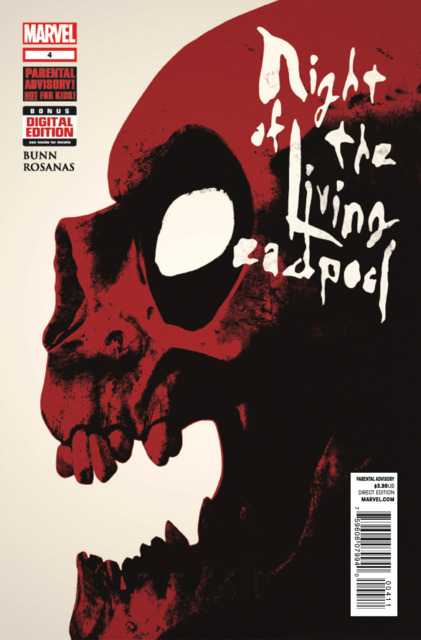