Deathstroke and Joker's Daughter are added to the lethal team and it's not long before they're sent to Russia for their first mission.

There's a new Suicide Squad in town and this debut chapter wastes no time sending them on their first mission! Writer Sean Ryan quickly and amusingly covers who these villains are, what they bring to the table, and why this new team exists. It would have been great to focus more on character and these new dynamics in this first chapter, but we're instead only given a glimpse of these relationships and personalities. Soon enough, the chapter takes a more explosive direction, and the desire to kick things off with a bang is understandable. Honestly, it's exciting enough and fun seeing these characters in action. It doesn't do anything overly creative or new with the fighting, but you can feel the tension rising and it's that feeling which has me anxious to see more. Watching these characters beat up and even kill nameless goons and officials is a thrill, but it's something we've seen plenty of times before and we're here because we like these characters and want to see new experiences with them. This first chapter seems to promise that'll exist in the future.

Jeremy Roberts' pencils are consistently enjoyable. The character work remains solid throughout and there's always a commendable amount of attention given to each of the settings. A little bit of the action felt a tad stiff or over the top, but overall, it's a good visual ride. That said, it's Blond's coloring that makes some of these panels truly memorable. Whenever there's bullets flying around or explosions going off -- which is often -- his vivid colors are legitimately attention-grabbing and fill the scenes with intensity. This is most noticeable in the double-page spread with Deadshot and when a character needs to escape an explosion.

Mr. Sage, the new person in charge of Task Force X -- or as he wants to call it, Task Force XL-- almost seems like "what if a comic book fan was running the team?" He's essentially creating a dream team and has no handle on just how dangerous and twisted these people can be. His fanboy-ish nature leads to some really entertaining bits of banter and they're trying to make it obvious he's in over his head. If true and this isn't an act of some kind, it seems like this opening story could pave the way for a stronger focus on Amanda Waller and her talents. Or maybe there's something more to this. It is a familiar last name, after all. Only time shall tell!

As stated above, some of the action felt a little off. Some of the choreography and visual storytelling is great (e.g. Quinn approaching the building and how she uses a grenade), but there's a few hits that felt a little stiff and, perhaps I'm missing something, but one panel made it look like Joker's Daughter has super-human strength. She's punching someone in the face and it almost seems like their head is exploding -- there's an over the top amount of blood.

The story is pretty straightforward so far and only seems to scratch the surface of the potential with these characters. Hopefully they'll receive more significant developments in future issues.

NEW SUICIDE SQUAD #1 seems to focus on style over substance. The issue aims to entertain as the new team is tossed into a fairly topical scenario and we're told to just sit back and watch all of the madness unfold. It's a good looking ride and it certainly is a fun one, too. That said, there's a handful of promising elements that are swiftly touched upon in this issue. The basics of several conflicts have been teased and there's a lot of promise with the two that are running the show. Watching these villains travel the globe and cause chaos is good fun, but this roster has so much potential for character-driven stories and you can see a glimpse of that direction in this first chapter. Now it's just a matter of seeing how it'll all be handled. Crazy action is always a blast, but focusing on the relationships between these characters could transform this book into something exceptional. Here's hoping we begin to see more of that in the next issue! 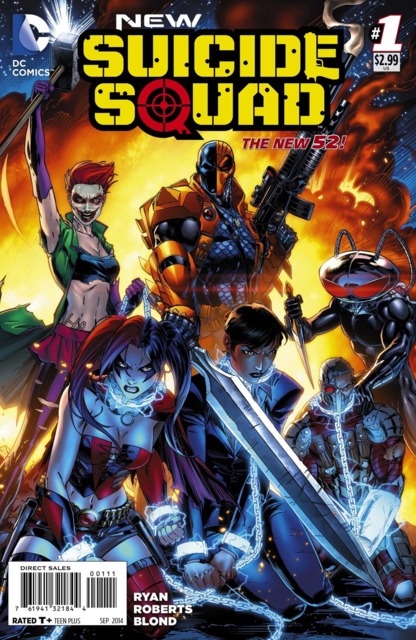