Although it has its flaws, this continues to be a stellar Marvel series.

Between Hickman's NEW AVENGERS and his AVENGERS series' at Marvel, NEW AVENGERS seems to be the better of the two books, and this week's NEW AVENGERS #6 continues to live up to that statement. Although this issue is really good, it still has some minor problems.

As usual the issue opens with a brief overview of some of the events that have transpired over the course of the previous five issues, and the tone of the story has moved from one of complete hopelessness (which was prevalent early on in this series) to hosting a sort of glimmer of light at the end of a very dark tunnel, but not without some serious consequences. In this issue it is revealed early on that our heroes may have found a solution to their problem, but that the solution in question might ultimately make them villains, not heroes.

The conflict that our heroes have encountered in this story arc is the fact that they must save their own planet at the expense of another planet just like it. Hickman uses these characters to essentially beg the question of whether these heroes can still be heroes if they are also made to eliminate an entire planet full of people. Not only that, but are they playing God and do they even have that right? Although I do feel that this idea could have been further explored in this issue (which I mention below), there is one very powerful moment in this comic that addresses the conflict. After Black Swan gives readers an explanation behind the "mapmakers" and what will essentially happen to the world if the heroes don't act quickly, Black Panther hesitates. Namor asks "what are you waiting for?" To which he responds by saying "I'm not waiting, I am remembering who I used to be." This is one of the most powerful moments I have seen captured in a superhero comic in a long time because it very eloquently sums up the moral and ethical conflict of the plot. In "remembering who he used to be" Black Panther is acknowledging that by destroying the other planet these heroes are no longer heroes, they are changed men and no better than villains.

The question posed in this series about whether or not these characters should be playing God by eliminating another parallel planet is a big one. Is it self defense? Is it murder? Do the means justify the end? After all, the "other" planet parallel to their earth isn't really the adversary of the story, they are simply victims of the same conflict. Or are they? I think that this idea could have been explored much further being that it really delves deeply into the idea of the morale of these heroes. Although we get the perspective of Black Panther, what do the other heroes think of what has transpired? I hope that Hickman addresses their sentiments individually in some way in the coming issues.

It seems that Reed is too trusting, and I almost feel he should know better. Also, it was great to see Latveria in this issue, but if you're going to bring the story there then it would have been nice to have seen more of Doom.

The last couple of pages will absolutely leave you excited about the future of this series. Although it would have been nice to see Hickman address the moral conflict in the plot (does eliminating an entire world make these heroes villains?), and Reed did display a moment of weakness when he underestimated Black Swan, this did leave a window for things to get really interesting in the future. Artist Steve Epting does a fantastic job illustrating this issue and the story will definitely leave you wanting more and excited about what is to come. 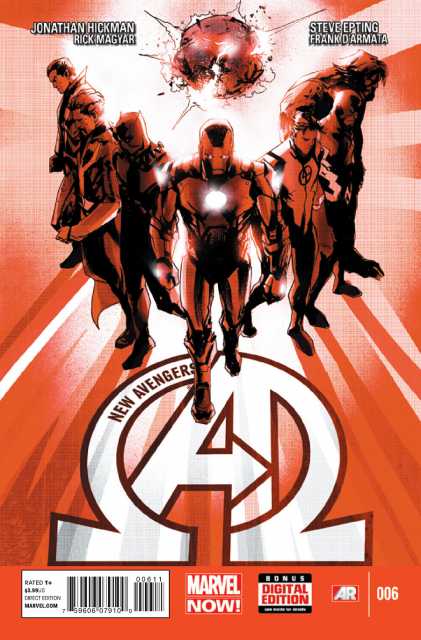