It is decided. Someone must decide which Earth lives and which dies.

This issue opens with an incredibly introspective scene of T’Challa speaking with his father’s spirit, and it is NOT a positive conversation. It only occupies two pages, but in a very, very short amount of time it establishes a tremendous internal conflict within the Wakandan ex-Monarch, as well as being an amazing treatise on the burden of rule and revenge. Meanwhile, in the present, Doctor Strange’s decision a few issues back pays massive dividends and the Illuminati are free to decide the fate of two worlds. But it comes time, none of them seem to have the fortitude to do what they all know is necessary until issue’s end, when a decision is made emphatically. Jonathan Hickman somehow manages to have his cake and eat it too by having this issue be a protracted conversation that still manages to be intense and fast-paced thanks to what’s going on all the while. Some characters are in the background, but they’ve had their moments in issues' past. This is mostly focused on Black Panther, Dr. Strange and Namor, with a quick aside to catch up, interestingly, with Black Swan and Maximus. The pacing in this issue is perfect and the emotional weight is absolutely incredible, and that owes a great deal to the art.

Valerio Schiti covers most of the art, while Salvador Larroca comes in on a few pages. Schiti’s work is perfect for this title and for this issue’s tone especially. There’s a certain arrogant swagger to some of his characters, I’ve mentioned it with Namor before but in this issue it’s Maximus’ show to steal, that seems so oddly in place with the things that happen throughout the issue and series. But he also communicates the absolute agony of the decision T’Challa is being forced to make and creates an incredible amount of sympathy for the character, especially as the issue comes to a close. Frank Martin and Paul Mounts are on colors and this is another place the book looks great. Tinges and tints are something I’m noticing in more and more books and this one has two, primarily, both of which set the tone and give the reader an idea of the underlying thoughts of characters. They also, and I’m incredibly impressed with this, make rapid transitions from one setting to the next seamlessly, even changing the tint to reflect the more mellow, subdued tone of the other scenes.

I’m a huge fan of Larroca’s art in general, but on this issue the style change is harsh and Larocca’s panels just aren’t up to his usual excellence. The pages look rushed, except for the final one which, admittedly, looks glorious.

This is easily the most significant issue since the introduction of “Incursion,” and Hickman continues to set the bar ever higher both for himself and whoever picks up after he departs the tile. The writing and the visuals work together to tell a story that shows Marvel’s willingness to stretch superhero titles to their limit, not just in terms of where they’re willing to go, but how they’re willing to get there. This remains one of my favorite sci-fi books that just so happens to star superheroes. 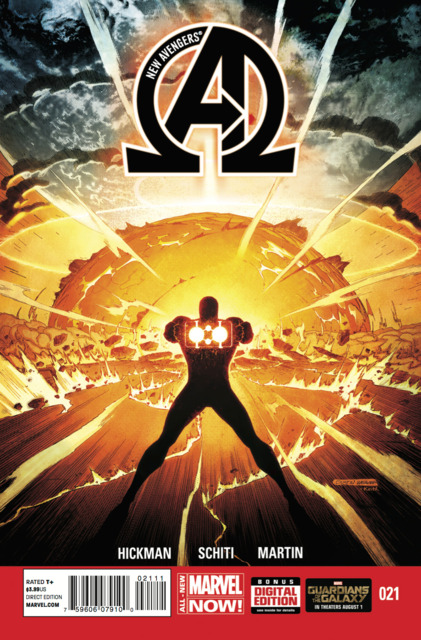